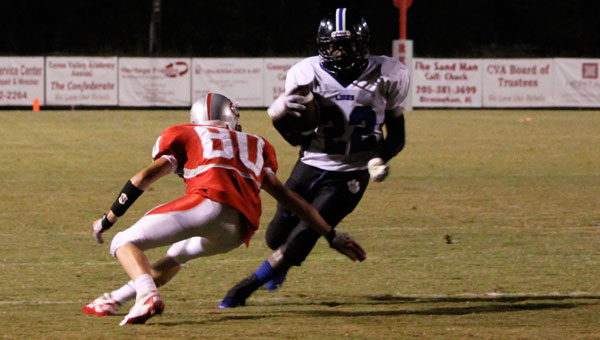 HARPERSVILLE — In a game that came down to the last play, the Kingwood Christian School football team beat the Coosa Valley Rebels (0-2) 24-17 on Sept. 2.

Despite being plagued by penalties, the Lions (2-1) maintained a lead most of the game, and their defense showed up big to give the team a W.

In start marked by turnovers, Lions’ junior linebacker Dalton Sparks recovered a Coosa Valley fumble in the endzone to give Kingwood Christian a seven-point lead with 1:41 remaining in the first quarter.

Both teams intercepted passes on the following two drives, but it was the Lions who capitalized, with sophomore wide receiver Montez Haynes scoring on a 30-yard touchdown pass with 3:06 left in the second quarter, extending the Lion’s lead to 14-0.

The Rebels’ first points came late in the second quarter when senior wide receiver Mason Donahoo hauled in a 65-yard touchdown pass from senior quarterback Cody Wood. Coosa Valley then tied the game at 14 on a two-yard touchdown run from senior Myles Varner with six seconds remaining in the half.

Following a scoreless third quarter, the Lions struck again with a 20-yard field goal by senior Luke Edge, bringing the score to 17-14 with 10:49 remaining.

The Lions then capitalized on senior running back Charles Robinson’s punt return to the Rebels’ 25-yard-line with a 25-yard touchdown run by junior Dalton Sparks with 9:32 left in the game.

The Rebels came eight yards away from the endzone and tied ballgame, but the Lions’ defense stopped them short as Wood was taken down short of the goal line.

Wood completed 22-of-38 for 296 passing yards, one touchdown and two interceptions and rushed for 38 yards on eight carries.

“We improved so much from last game,” Wood said. “We’re looking at it as we did out job, and we didn’t lose this game, we just ran out of time.”

“Tonight we played hard,” said Coosa Valley head coach Bobby Hughes. “We hadn’t done that all year, and we came together as a team tonight.”

Lions’ sophomore quarterback Gavin Sumrall was 4-of-13, passing for 61 yards, one touchdown and one interception. Haynes had four catches for 57 yards and 15 tackles.

“I feel like I did pretty good,” said Robinson, who carried the ball 18 times for 97 yards. “I ran the ball hard for my team.”

Head coach Bob Spurgeon said that despite the large number of penalties his players racked up, he was proud of how they finished.

“I was really proud of our efforts,” Spurgeon said, “much more than I’ve been in the previous two games.”

FROM STAFF REPORTS The Shelby County Wildcats made the trek to Center Point in their first Class 5A, Region 7... read more