Teaching past 9/11 tragedy to the future 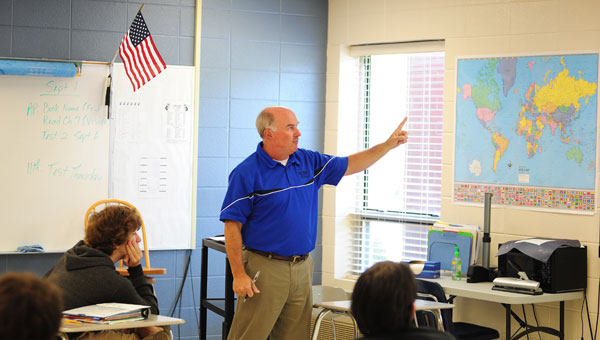 Shelby County high school teachers are challenged with presenting the material in a manner that will impact their students. Students don’t officially cover the events of Sept. 11, 2001 in history class until 11th grade.

“My 11th graders were about 6 years old (in 2001),” said Donnie Teague, a Chelsea High School U.S. history teacher. “The only thing they know is what they’ve read or seen. It will be real when we get done talking about it.”

Teague plans on presenting websites with video footage and narrative of the events.

“Sometimes it’s good to find good footage. It doesn’t have to be so graphic, people jumping out of buildings,” he said. “I think right now they don’t see something as real as they will when we get done.”

Teague said even if students aren’t in 11th grade history classes, they will still see the footage of Sept. 11 because of the 10th anniversary of the attacks.

“We want every student to get it, no matter the grade they’re in,” he said.

Montevallo High School U.S. history teacher Tena Niven was in her first year of teaching when Sept. 11 occurred in 2001.

“I was actually in my classroom at Montevallo, my first year, and somebody had gotten word to us that it had happened and was happening,” Niven said. “At that time, we didn’t have the cable hooked up, but I happened to have a set of rabbit ears in my room. I let the kids watch too. We pretty much watched all day, being in disbelief at what we were seeing.”

Montevallo High School will also have a school-wide media broadcast for all students.

“We discuss it with the kids,” she said. “A lot of what I get into with the kids is trying to tie it in with U.S. history.”

Niven’s class covers the Salem witchcraft trials when the anniversary of Sept. 11 comes around, so she tries to tie the event with the class material.

“About that time, we’re beginning to talk about the Salem witchcraft trials and how people were stereotyping people. I tie in 9/11 about how, after 9/11, people felt about people who looked Arabic,” she said. “Whenever people are scared or uncertain, our first response is to do that. It shouldn’t be, but it is.”

Niven said the events of Sept. 11 aren’t “real” for her students.

“It doesn’t seem as real. We probably haven’t had anything lately that the kids can kind of compare it to,” she said. “We watched a little bit of when we were bombing Iraq. We’re watching it like it’s a movie, but it’s actually happening. This bunch would’ve been elementary school when we were watching it on TV. They have not had an experience yet to compare it to.”