Beginning another school year in our current economy may threaten theatre arts in some school systems. However, Pelham High School’s theatre teacher Jamie Stephenson and her students are committed to keeping theatre alive and kicking in Shelby County Schools.

“We’ve won state awards, traveled to study our craft and perform and served as leadership in statewide theatre events,” Stephenson said. “Serving our own community is the next step in building this department.”

With many schools unable to cover travel and ticket costs to attend productions in Montgomery or downtown Birmingham, Stephenson wants to insure that theater is accessible to every school in Shelby County. Her students’ planned productions will make this goal a reality. 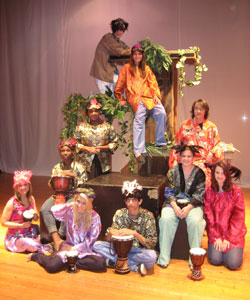 The season kicks off on Dec. 15 with a 9 a.m. production of Harper Lee’s “To Kill a Mockingbird.” Ticket prices will be $3 for all high school students in Shelby County Schools attending during this daytime performance. Stephenson hopes that teachers will be excited to bring their students to PHS to see Lee’s beloved novel come to life on stage. Evening productions for all ages will follow on Dec. 16 and 17.

Stephenson and her students are also forming a PHS Traveling Theatre Troupe. February, March and April shows available for traveling presentations on any Shelby County middle, intermediate or elementary campus will include a stage adaptation of Sendak’s “Where the Wild Things Are” and “Tales of Trickery” — an Asian folktale that includes stilt walking, drumming, acrobatics, masks and puppetry.

Stephenson said, “For $2, students can see a play or have a workshop with PHS theater students on their own school campus. Our Traveling Troupe allows for a theater experience without all of the work and expense of planning a field trip.”

A successful season could yield exciting rewards. “The Theatre students want to be adjudicated to perform for an audience of more than 7,000 at the International Thespian Festival in Nebraska this summer,” said Stephenson.

Attending the International Thespian Festival allows students not only to perform, but also to attend workshops and compete for thespian scholarships at the national level. Of course, that’s just where we want our PHS Theatre students — competing among the nation’s best.

Many classrooms, many lessons