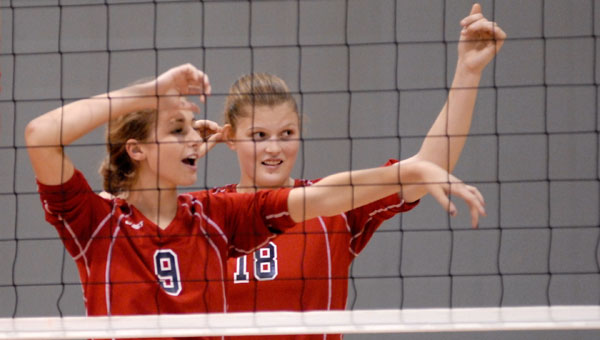 With his squad limited with injuries and inexperience, the Eagles have seen plenty of ups and downs through their first 14 matches.

“Baptism by fire,” Woods called it. “We’re just trying to get a little bit of energy in the lineup.”

The Warriors put up a fight in the first game before the Eagles dominated in the final two games to clinch the sweep.

“Thompson came out and played awesome,” Woods said. “They gave us everything we wanted.”

Senior Jade Douglas finished with a team-high 10 kills for the Warriors, who fell to 0-3 in Class 6A, Area 10 play.

Senior Sonia Acosta finished with two service aces and a team-high 20 assists in the match.

The Eagles erased an 18-15 deficit in the opening game with a late run. Beach clinched the 25-23 win for Oak Mountain in the first game with a kill.

Oak Mountain used a 7-0 run, which was capped with back-to-back kills by senior Amanda Marks and Beach, late in the second game to move one step closer to a sweep with a 25-14 win. Marks recorded a kill to clinch the second game.

Bivins recorded a kill and Guiser had a block late in the third game, but the Warriors had trouble fighting off a sweep. Goodwin registered two kills down the stretch to help the Eagles clinch a sweep with a 25-13 win in the third game.

The Warriors revamped their front line recently with the addition of Bivins, who moved up from the junior varsity squad.

Thompson coach Kellyanne Turnbow said Bivins has been playing like a seasoned veteran for the Warriors.

“I’ve seen some major progression from her,” Turnbow said.