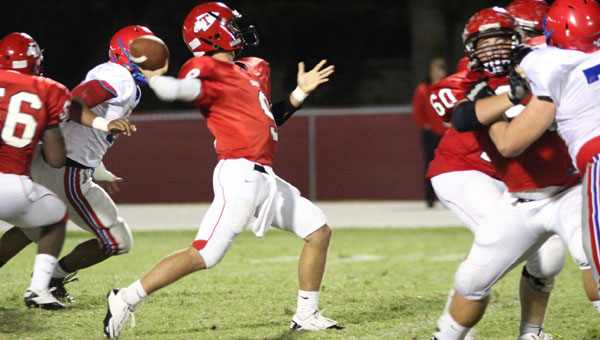 ALABASTER — The Vestavia Hills High School Rebels took charge early and coasted to a 47-13 win over Thompson in the Warriors’ home opener Sept. 9.

The Warriors (0-3 overall, 0-2 in Class 6A, Region 6) got two early first downs before the Vestavia defense forced them to punt.

Rebels’ senior Georgie Salem got things rolling for Vestavia, taking the handoff and motoring 53-yards for an early score, giving the Rebels a 7-0 lead. Salem finished with four rushing touchdowns and one receiving.

Thompson was plagued by turnovers again this week, fumbling the ball away four times. The Warriors’ first came on the ensuing kickoff, giving the Rebels the ball at the Warriors’ 22-yard line.

“You just can’t turn the ball over that many times to a Vestavia team and expect to stay in the game,” said Thompson coach Caleb Ross.

Vestavia also had problems holding on to the ball early, turning the ball back over to the Warriors, but the defense immediately stripped the ball away and ran it in for their second score of the quarter.

Thompson’s tandem of Trey Matherson and Avery Hale connected again this week for the long ball with Hale hauling in the 80-yard touchdown pass in the second quarter to get the Warriors on the scoreboard. A failed two-point conversion left the score 26-6 in favor of Vestavia.

Thompson only scored once more in the contest. With time winding down in the
first half, Matherson hit D.J. Daniels in the corner of the end zone for a 25-yard scoring strike. Matt Nall’s extra point made it 26-13 at the half.

Matherson finished 17-of-22 passing for 242 yards and two touchdowns. Thompson will travel to Hoover to face the Bucs next Friday night.