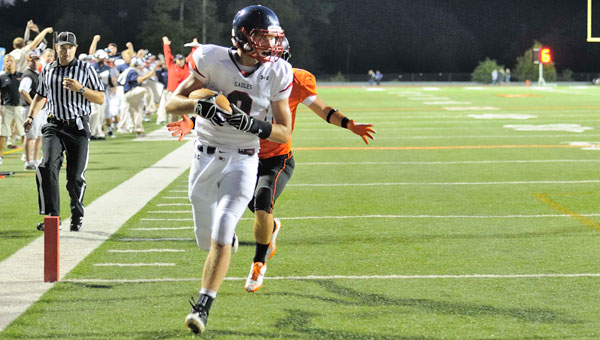 Oak Mountain High School wide receiver Heath Quinn heads into the end zone for a touchdown after reeling in a pass from Jake Adams in the Eagles' loss to Hoover in a Class 6A, Region 6 game Sept. 9. (Contributed/Barry Clemmons)

Harris’ emotions turned a complete 180 degrees one year later after watching his team put fear in Hoover before falling to the Bucs 21-14 following two late touchdowns.

“We’ve made a tremendous amount of progress,” Harris said. “That’s due to a great group of kids and assistant coaches. We went down in a valiant effort.”

Oak Mountain jumped out to an early 14-0 lead following a pair of touchdowns in the opening quarter.

Jake Kelley returned a rumble 30 yards for a touchdown and kicker Mitch Mathias added the extra point to give the Eagles a 7-0 lead with 6:28 left in the opening quarter.

The Eagles added to the lead with 11 seconds remaining in the first quarter when Heath Quinn reeled in a 15-yard pass from quarterback Jake Adams.

Mathias added the extra point to push the Eagles’ lead to 14-0.

Oak Mountain held a 14-0 lead until the Bucs scored three touchdowns in the final quarter. Hoover tied it with a passing touchdown with 3:35 remaining and took the lead with a rushing touchdown with just 2:03 left in the game.

“We’ve got nothing to be ashamed of,” Harris said. “I’ve never been more proud of my team. We feel like we can go toe-to-toe with anybody.”