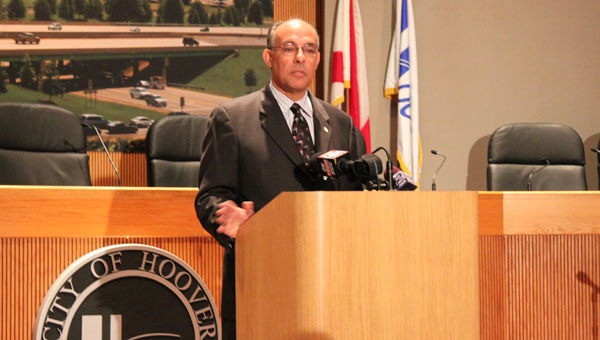 That resolution was removed from the meeting agenda Monday at the request of one of two commissioners who said they needed more time to consider the hire.

Hiring a county manager requires a supermajority vote of 4 of 5 commissioners.

If offered the job, Petelos has said he would accept. For now, he’s waiting.

“It’s in their hands and I’m waiting to see what they do,” Petelos said Tuesday afternoon.

Petelos, a Jefferson County native, held a press conference Sept. 6 to say he would interview Sept. 7 for the position. After the interview, all five commissioners voted to move the item from the administration services committee to the full commission Sept. 13.

Commissioners Sandra Little Brown and George Bowman expressed concerns about not having enough time to consider the hire, according to Pascal Caputo, Carrington’s chief of staff.

“It did catch us off guard a little bit, given that the motion to move forward was actually seconded by Commissioner Bowman,” Caputo said. “He subsequently changed his mind within a day and wanted to slow it down.”

The plan now “is to work with them to get the info they need to be able to make a decision in two weeks,” Caputo said.

“He never communicated those to us directly,” Caputo said.

Brown met with Carrington on Monday and requested the resolution to hire Petelos be removed from Tuesday’s agenda, Caputo said.

The commission has until an Oct. 1 deadline, set by the state, to make an offer.

Caputo said the matter would be up for consideration again at the Sept. 27 commission meeting.

Jefferson County’s manager would be paid $180,000 to $240,000, the yearly salary recommended by Waters Consulting, a national search firm hired by the county, Caputo said.

Crim a constant on THS sideline

THS alumni Frankie Crim captured the Warriors rushing out of the fieldhouse during their Sept. 9 game against Vestavia. Crim... read more