Lions wear down Hornets in rivalry 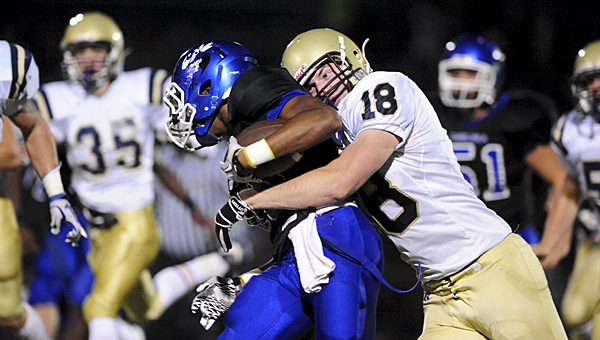 CHELSEA — Briarwood Christian School senior Matthew Furuto didn’t sense any panic on the Lions’ sideline with his team trailing rival Chelsea by 17 points with just more than one minute remaining in the third quarter.

The running back and his teammates just kept plugging away.

The grit and determination paid off for the Lions, who scored 28 unanswered points on their way to a 45-34 win over the Hornets in a matchup between two of the best Alabama High School Athletic Association Class 5A teams in the state.

“You can’t ever quit,” Furuto said. “Guys just kept encouraging one another. We knew we had a chance to come back.”

When senior quarterback Ben Craft led the Lions on a quick scoring drive following Chelsea’s final touchdown in the third quarter, Furuto said the comeback was in motion.

“We had momentum,” Furuto said.

The momentum carried the Lions to three fourth-quarter touchdowns against a Chelsea defense suffering from fatigue and cramps to team leaders.

Chelsea senior Jake Ganus, who played practically the entire game on both offense and defense before cramps became an issue in the fourth quarter, said the Hornets didn’t do the things they needed to do to protect the 17-point lead.

“We didn’t come out and execute like we needed to to win the game,” Ganus said.

Furuto rushed for 61 yards and a touchdown on 14 carries.

Ganus rushed for 199 yards and three touchdowns on 31 attempts as he broke the 100-yard rushing mark for a fourth consecutive game. Ganus completed 14-of-23 passes for 129 yards with a touchdown and an interception.

Julius McCall rushed for 148 yards and a touchdown on 10 carries.

The Lions took an early lead when senior kicker Benson Mulvaney nailed a 37-yard field goal with 7:46 remaining in the opening quarter.

Chelsea (3-1 overall, 2-1 in Class 5A, Region 5) responded with a 10-play, 65-yard scoring drive, which was capped with a  1-yard touchdown run by Ganus. Taylor Martindale’s extra point attempt was blocked, which left Chelsea with a 6-3 lead with 3:46 left in the first quarter.

The Hornets came back and answered quickly with a 9-play, 90-yard scoring drive, which was capped with a 1-yard touchdown run by Craft with 24 seconds left in the second quarter. Julius McCall ran in for the two-point conversion to cut the Lions’ lead to 17-14 at halftime.

Following a three-and-out by the Lions on their first possession in the second half, McCall found paydirt from 72 yards out on the Hornets’ first play from scrimmage to give Chelsea a 21-17 lead following Martindale’s extra point with 10:29 remaining in the third quarter.

Following another three-and-out by Briarwood Christian, the Hornets capped an 11-play, 85-yard scoring drive with a 13-yard pass from Ganus to Matthew Graben to take a 28-17 lead following Martindale’s extra point with 3:51 left in the third quarter.

Following a successful onside kick by the Hornets, which was recovered by Micah Wallace, Ganus scored on a 23-yard touchdown run five plays later. Martindale’s extra point was blocked, which left Chelsea with a 34-17 lead with 1:57 remaining in the third quarter.

Craft hooked up with McKelvey for a 15-yard touchdown pass with 23 seconds left in the third quarter, which started the Lions’ comeback. Mulvaney added the extra point to cut the deficit to 34-24.

Daniel Robert reeled in a 24-yard touchdown pass from Craft and Mulvaney added the extra point with 8:37 left in the game to cut the Hornets’ lead to 34-31.

The Lions took the lead for good following a 1-yard touchdown run by Craft with 4:56 left in the game. Mulvaney’s extra point gave Briarwood Christian a 38-34 advantage.

Briarwood Christian senior defensive back Chad Davis picked off a pass by Ganus with 2:46 remaining, which put an end to the Hornets’ comeback hopes.

“It’s kind of a pay day for a lot of hard work that goes back to this summer,” said Briarwood Christian coach Fred Yancey. “We were fortunate to wear them down.”