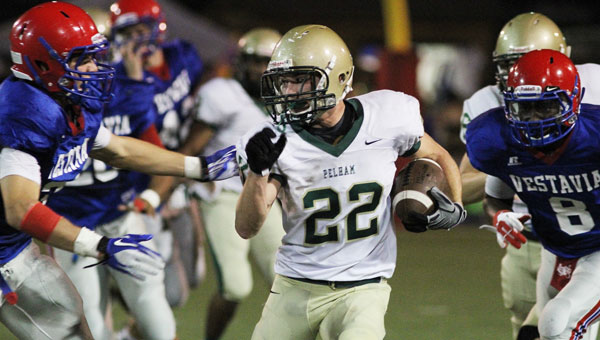 Pelham head coach Brett Burnett admitted after the game it was a risky call.

The Panthers had taken the Vestavia Hills to two overtimes, and were down 27-24 when Vestavia stopped quarterback Devon Mines, who started after senior quarterback Gray Cato and senior Tucker Thomas were “suspended indefinitely” from the team earlier in the week, on the 2 yard line on third down.

A field goal would have tied it, but the Panthers wanted the victory.

“In any other situation, I don’t know what I would have done,” Burnett said. “But we went for it, and the good Lord blessed us.

“This was a total team win. You can put that in parenthesis and capital letters and underline it,” Burnett said.

After junior Eli Beall powered into the end zone from 2 yards out, sealing the Panthers’ 30-27 victory, Pelham players and fans rushed the Vestavia field to celebrate their second win of the season.

“This one is on up there. This is a great win for Pelham,” Burnett said shortly after he was doused with the team’s water cooler.

Vestavia scored on its first possession of the game, and then extended its lead to 10-0 on a field goal after recovering a Pelham fumble midway through the first quarter.

On Pelham’s next possession, junior Kenny Meadows scored on a 2-yard run. Perko’s extra point cut the Rebels’ lead to 10-7.

The Panthers tied it up at 10-all midway through the second quarter when John Perko connected on a 37-yard field goal.

Vestavia answered on its next possession on a 7-yard rushing touchdown and successful extra point, giving the Rebels a 17-10 halftime lead.

After a scoreless third quarter, Mines connected with J.T. Ross on a 47-yard touchdown pass midway through the fourth quarter.

Perko again added the extra point, sending the teams into overtime tied at 17.

Pelham struck first in overtime, as Beall made it into the end zone from 1 yard out, and Perko added the extra point.

But Vestavia answered back on its first overtime possession, scoring on a 2-yard run.

With the teams tied at 24, Vestavia took the first possession of the second overtime.

On third and goal at the 11, Pelham junior defensive back stopped Vestavia’s Georgie Salem on the 7 yard line.

The Rebels were forced to settle for a field goal, giving them a 27-24 lead before Pelham’s ensuing fourth-down touchdown to seal the Panthers’ victory.

Pelham racked up 274 yards of total offense on the night, and Mines completed four of five passing attempts for 73 yards and a touchdown.