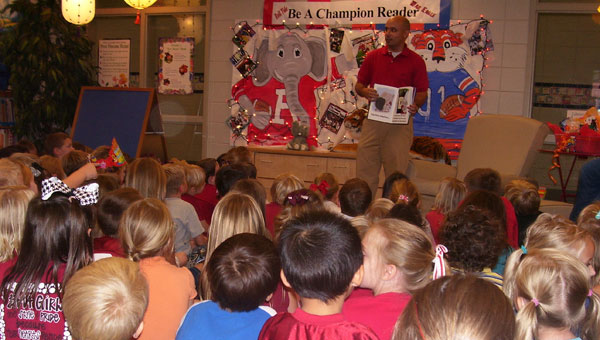 Author Josh Torres explains the publishing process to a group of Chelsea Park Elementary School students during the Sept. 9 workshop at the school. (Contributed)

Alabama football’s “Big Al” and Auburn’s “Aubie” joined Chelsea Park Elementary School students on Sept. 9 for a rousing pep rally. Husband and wife team and co-authors Wendy and Josh Torres, shared their books “This Little Elephant” and “This Little Tiger” in four sessions (for the school’s four grades) in the school library.

Attorney Josh Torres said he first got the idea for posters, using the schools’ mascots, but when he shared the idea with his wife, she suggested books. So they contacted a publisher, who liked the idea. Thus, with the help of illustrator Charr Floyd, “Big Al” and “Aubie” were born.

Using their books, the Torreses conducted workshops on the writing process, incorporating the books and role play by the students.

Four students from each class played the parts of writer, illustrator, editor and publisher.

Each student was given an Auburn/Alabama bookmark for helping. Then Josh, with Wendy flashing notes and illustrations on a screen, explained the publishing process in more detail.

When asking the children questions as he went along, a sea of little hands went up. Children also had questions for the Torreses. One young boy wanted to know if children can publish books and was assured that they can.

“If you have an idea for a book, talk to your parents about it,” Josh told the kids. “Editors don’t care how old an author is if the book is interesting. So write about something you love. ”

He stressed, however, that just like anything else in life, we have to work hard to achieve our goals.

To highlight the theme and get the kids more involved, they were encouraged to wear the colors of their favorite team. Some wore Auburn or Alabama clothing while some girls also sported blue and orange or crimson and white hair ribbons.

As the grand finale, classes were divided into Alabama and Auburn “pep squads” and “raised the rafters” with team yells.

“We are using this as a springboard to jump into the AEA sponsored reading promotion called ‘Be a Champion and Read,’ said Allison Shaw, Chelsea Park Elementary Library Media Specialist. “The kids are keeping up with reading logs and are choosing to read for Alabama or Auburn. We’ll be graphing to see which team has the most readers.”