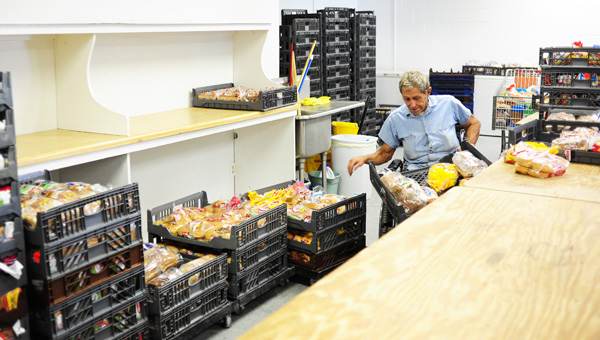 On a warm summer morning several weeks ago, Alabaster resident Jessica Plowman and her two daughters were scouting local garage sales when they passed a large group of people waiting in line at the Manna Ministries building on Alabama 119.

“I hadn’t thought much about what I had seen at first, but as Monday came around my curiosity got the better of me so I started making phone calls and asking others on a social site,” Plowman said. “The image of seeing elderly, young people, children and infants standing outside wouldn’t leave my heart.”

After learning more about Manna Ministries, which gives out food to those in need from 9:30-11:30 a.m. every Saturday after holding a worship service for them, Plowman contacted Manna Ministries Building Manager Wayne Blankenship and asked him how she could help.

“She came up to me and said ‘Can I volunteer?’” Blankenship said. “She brings her kids up there to help, and she has really gotten into it. Everyone up there just loves her.”

Although Blankenship said the organization has plenty of volunteer help, Manna Ministries has been struggling with a problem Plowman said she recognized almost immediately after walking into the building the first time.

“Walking into the small hot building your eyes can’t help but instantly be drawn to the almost bare and empty shelves of this community food bank,” Plowman said. “As the volunteers began to set up, all that was given out was a small plastic bag containing two cans, a pasta and salad dressing. Along with that you receive two loaves of bread, bakery bread and three sweets.

“My heart sank I just could not believe as a city this is all we are giving to our neighbors in need when they are struggling and hungry,” Plowman added, noting donations to the ministry slow significantly “unless there is a local disaster.”

Blankenship said he has been involved in Manna Ministries for 16 years, and has seen the need for the program increase dramatically during the economic recession of the past few years.

“People just don’t realize how bad it is these days,” Blankenship said, noting Manna typically serves between 70-125 people every week. “I have had people come in who have four and five degrees, but they haven’t been able to find a job for years.” 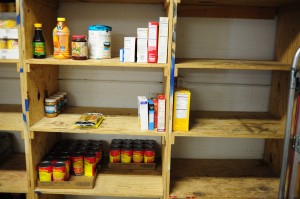 The increased demand has placed stress on the organization’s food pantries, and Blankenship said the demand will continue to increase as the holiday season approaches.

To help fill the need, the organization is looking for monetary and food donations, especially canned food goods and meat.

“I will meet anyone anywhere to pick up any non-perishable food items, any health and beauty aides, baby diapers, formula, etc.,” Plowman said, noting “no donation is too small.”

“I am all busted up and screwed together, but I make myself get up every Saturday morning, because those people wouldn’t be in line every week if they didn’t need our help,” Blankenship said.

To donate to or volunteer with the organization, visit Manacharities.org, or call Blankenship at 337-6916.