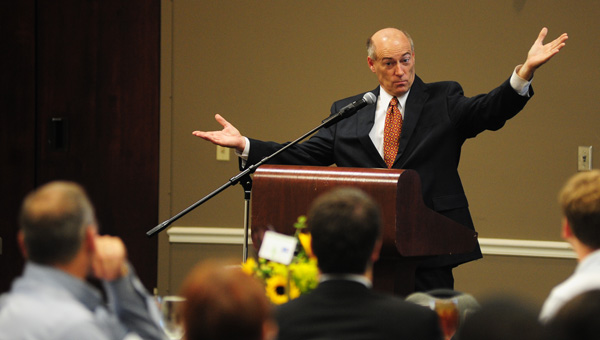 The United Way of Shelby County will be looking to raise more money than it ever has during its 2011 campaign, organization officials announced during a Sept. 21 campaign kickoff event.

During the kickoff, which was held at the Pelham Civic Complex, United Way of Central Alabama President and CEO Drew Langloh said the Shelby County United Way will seek to raise $3 million during its 2011 campaign.

Because of the current economic climate and the April 2011 Alabama tornado outbreak, Langloh said reaching the goal will be “extremely important” this year.

“The tornadoes were an unwelcome visitor on top of a lot of other difficulties people were already facing,” Langloh said. “I think we are going to be at this for a while. We are hanging with families over a long period of time to help them get back on their feet.”

Every year, United Way volunteers collect donations and distribute them to dozens of nonprofit organizations in Shelby County and throughout the state. United Way also conducts several programs of its own to help those in need.

During the kickoff event, James Spann, the chief meteorologist at the ABC 33/40 television station, encouraged the United Way volunteers to pursue three goals while working to raise money for this year’s campaign.

Spann told those in attendance to “have a passion,” to work with integrity and to “have a servant’s heart.”

Spann said the volunteers will face a “bizarre society,” while working to raise money for those in need, but encouraged them to “attack this job.”

“We had hundreds of calls laced with profanity on April 27 because programming had been cut off (to provide live coverage of the tornado outbreak),” Spann said. “It’s a bizarre society we live in today.”

During his speech, Spann told the volunteers to have integrity and always “do the right thing when nobody is looking.”

“There is a pretty serious lack of integrity in our state,” Spann said. “I encourage you to be a man or woman of integrity. People seek out men and women of integrity to serve them.”

Spann also said the volunteers “will not be successful” if they don’t work with a servant’s heart.

“If you are selfish, things begin to creep into your life ­– things that will make you fail,” Spann said. “But when you help others, you get blessed. Everybody in this room is going to be blessed because of what you do for United Way.”