Spain Park falls on the road at Bob Jones 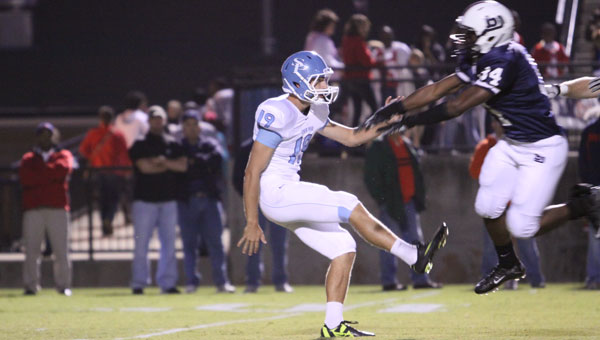 Spain Park High School punter Jake Hoffman has one of his punts blocked by a Bob Jones defender in the Jaguars' loss Sept. 23. (Contributed/John Parkes)

By KENNETH HARRIS / For the Reporter

The game opened up with Bob Jones’ first defensive stop of the night, which included a sack of Spain Park quarterback Nick Mullens.

As the Jaguars were punting the ball, the punt was blocked, giving the Patriots offense the ball and good field position. The Patriots took advantage by scoring an 8-yard touchdown by Jay Rodgers making the score 7-0.

The Patriots weren’t done yet as the defense caused another three-and-out, making Spain Park punt the ball.

The offense went back to work as quarterback Jeffrey Moss completed a shovel pass to Kevin Wright for a gain of 30 yards. With 8:12 left in the first quarter, Spain Park sent the blitz, but the Patriots’ quarterback was able to maneuver his way around the Jaguars players and find Nick Richardson in the end zone to push the lead to 14-0.

Spain Park finally found a spark on offense, but it was cut short by an interception by defensive back Dez Dennis, which gave the ball back to Bob Jones. But Bob Jones’ offense couldn’t find a rhythm as the Patriots were called for pass interference and holding, which pushed them back deep in to their own territory.

The second quarter was a defensive quarter as neither offense was able to drive down the field and score. Both teams played tough defensively, putting a lot of pressure on the opponent.

Bob Jones got the ball back after halftime, but the offense was still thinking about that last quarter as the Patriots were stopped on their opening drive.

Spain Park had other plans.

Led by quarterback Nick Mullens, the Jaguars marched down the field only to get a field goal after allowing a crucial sack on third-and-5, leaving the score 14-3.

The Patriots’ offense was still on a vacation because on their very next drive, Jeffrey Moss’ shovel pass was intercepted. The turnover led to a touchdown pass from Mullens to Drake Grisham, which cut the lead to 14-10.

The fourth quarter started with Spain Park moving down the field, but the Jaguars were stopped at the goal line before kicking a field goal to cut the lead to 14-13.

With a fumble recovered by Rishad Goode, the Patriots were able to build on the lead, making it 21-13.

Spain Park tried to get its offense moving again, but Mullens threw an interception to Markco Douglas. Douglas returned the interception for a touchdown to account for the final score in the game.

Calera High School running back Sam Adams tries to break away from a Jemison defender in the Eagles' loss Sept.... read more