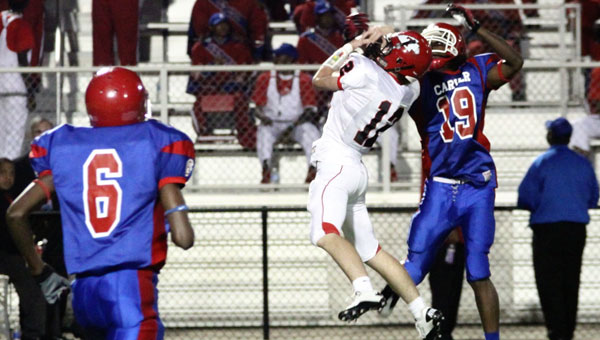 In the first half, Thompson controlled the game defensively, but failed to execute properly on offense and penalties left them with only a 7-0 lead at the half.

That score came on the first play of their second possession. Starting on their own 15-yard line, Trey Matherson hit Rasheem Mangault with the a screen pass and he did the rest by outrunning three defenders down the sideline for the score. Matt Nall’s extra point made it 7-0.

The Warriors missed a field-goal attempt in the second quarter and had a touchdown called back on penalties.

“We had control of the game in the first half, but we just didn’t capitalize on the opportunity,”Ross said. “To get a shutout against any team makes me proud, and it is all based on the way we played with confidence in the second half.”

Thompson came out and scored on an 8-yard run by Demetriuse Alexander at the 7:52 mark in the third quarter.  Nall added the extra point.

The fireworks then began just sixty seconds later as Austin Carter intercepted the Rams’ quarterback at the Carver 21-yard line and returned it for the score.  Carter finished the night with three picks.

Carver took the kickoff from Thompson and moved the ball into the Warriors’ territory.

With first-and-10 at the Warriors’ 33, the defense stepped up with Austin Sapp grabbing the pass at the 22-yard line and dashing 78 yards for the score.  Sapp also had an interception in the first half.

A 22-yard touchdown run by Dee Tolbert, and a 31-yard quarterback keeper run by Jake Walters capped a 34 point third-quarter performance by the Warriors.

A fumble recovery in the fourth quarter gave the Warriors the ball in the red zone and Learon Lewis ran it in from the 9-yard line for the final score of the night.  Christian Jetzel added the extra point.

Nick Gentile also had an interception in the Warriors’ victory.

Defensive backs coach Chuck Nelson said, “You could see these guys were having fun tonight, and they did it by playing with more confidence and discipline.”

The Warriors will return to Alabama High School Athletic Association Class 6A, Region 6 play next week as they travel to Oak Mountain.

Panthers get big win at home