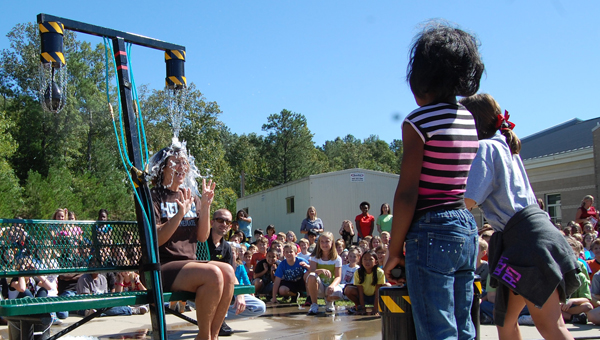 HELENA – Helena Intermediate School students were rewarded at the end of the school day Sept. 30 for their hard work raising money for a good cause.

Students raised more than $22,000 in donations for the school’s annual Healthy Heart Fun Run, exceeding their goal by more than $2,000.

For meeting their goal of raising at least $20,000, students gathered at the playground on a Friday afternoon to watch teachers and an assistant principal get soaked with water balloons.

Seven teachers had water balloons exploded above their heads, because their individual classes raised at least $1,000.

The school’s top two individual fundraisers did the honor of exploding balloons over the head of Genet Holcomb, the assistant principal. 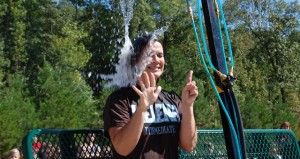 Holcomb sat on a bench with a water balloon suspended above her head. An air hose was attached to the balloon. Pumping the air hose to explode the first balloon was Cylie Jones, a third-grader who raised more money than any other student.

“It was fun,” Jones said. “It felt nice to do it. I really do owe the people who paid me donations.”

“It was very cool,” a smiling Beeman said.

For the grand finale, Jones and Beeman dumped a large bucket of ice water on Holcomb’s head. 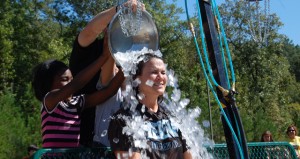 “It’s nice to be chilling out,” a soaked Holcomb said with a laugh.

“It’s incredible they raised that much money,” Holcomb added. “It just shows the community support. It’s families, it’s grandparents, it’s friends and people that don’t even live in our area but they think that much of our school to support us in that way.”

Gary Ivey, center, stands with, from left, his daughter, Tyler, and his wife, Carolyn, after being named Hoover's interim mayor... read more