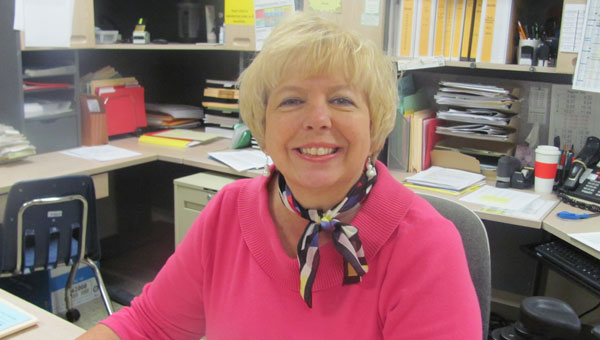 Sue Dennis has been serving as the Thompson High School registrar for more than 20 years. (Contributed)

Sue Dennis, registrar at Thompson High School, has a claim to fame. Her father, Ernie Chapman, moved his family here from Winston Salem, N.C., more than 55 years ago to open the Five Points West and East Lake Krispy Kreme doughnut shops (I am so personally thankful he brought one of my favorite franchises to this area). Seven years later, her father passed away, and his widow moved her family to Shelby County. Mrs. Chapman still lives on Valleydale Road and, at the age of 90, is “contemplating” a move which would place her safely in the Dennis’ basement apartment.

To know Dennis is to love her. She has an infectious grin and sparkling eyes. One can imagine that 40 years ago Jim Dennis was eager to get to Alabaster from his Army post in Germany and watch Sue graduate from Thompson High School. They got married the same whirlwind week.

Blessed with a daughter Kristy and two sons, Mark and Scott, family only comes second to God. “Gaga” and “Papa” are grandparents to three granddaughters and one grandson, all 5 and younger. Friday night is family memory making time. “The gift of a special memory is the greatest gift,” Dennis said. Although she has traveled to many unusual and beautiful places, including Hawaii, Dennis remains a church, family and work-oriented person not really caring to go anywhere “too far” away from her family. Two older brothers and a younger sister live within a 12-mile radius.

For the past 20 years, Dennis has held the registrar position at THS. When she began, she was the only office employee with a computer, and there were 800 students. Now there are 1,800 — no way to know them all. In general, Dennis said family dynamics have changed. There are many more single-parent homes and kids seemingly more “on their own.” When Dennis took the job originally, she intended on working until her children were out of school. Now she is a permanent fixture at the place she believes God wanted her to be.

“Every time I would think of leaving for a job that paid a little better, God would use some student to show me I was in the right place,” she said.

Happy to say she works “with her friends” and has a great Christian support atmosphere means so much to Dennis.

“When one of our own is in need, I have been blown away by the love and generosity we experience,” she said.

She enjoys her job and laughs a lot. “Laughter can cure most anything,” Dennis said.

As a member of Westwood Baptist Church since 1996 and an Adult Couples Sunday School teacher since 1998, Dennis is thankful for God’s continuing “Grace and Peace” in her life. Through thick and thin, good, bad and sad, God has strengthened the faith of Sue Chapman Dennis.

“I am learning how important it is to stop telling God how big the storm is and to start telling the storm how big God is,” she said.