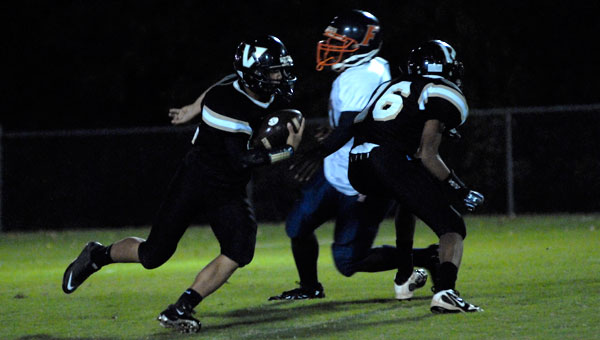 Ellison didn’t feel the final score was a good indication of his team’s performance, particularly the Yellow Jackets’ defense.

Despite a 43-0 win over the visitors, Ellison thought his players were distracted by the festivities off the field.

“We were sloppy on both sides of the ball,” Ellison said. “It says zero up there, but we were not playing Vincent football.”

The Yellow Jackets didn’t need a huge defensive effort after putting up 43 points on the offensive side of the ball, including three touchdown runs by senior Shacorry Lilly.

Lilly led the Yellow Jackets with 173 rushing yards on 11 attempts. The Yellow Jackets helped their playoff chances tremendously as they improved to 5-1 overall, including 4-0 in Class 2A, Region 4.

“It was a really big win,” Lilly said. “We had to keep our minds focused on the game because we knew (Francis Marion) was a good team.”

Lilly opened the scoring for the Yellow Jackets on the second play of the game as he raced 87 yards to the end zone to give the home team an early 6-0 lead with 10:51 left in the first quarter.

Terio Rogers caught a 66-yard pass from Demauntey Johnson on the Yellow Jackets’ fourth offensive play to give Vincent a 14-0 lead following a successful run for the 2-point conversion by Lilly with 3:08 remaining in the opening quarter.

The Yellow Jackets recorded a safety to push the lead to 16-0 after Francis Marion quarterback Radge Turner was called for intentional grounding in his own end zone with 1:17 left in the first quarter.

Lilly added his second rushing touchdown on a 26-yard scoring run with 5:37 left in the second quarter, which pushed Vincent’s lead to 22-0. Dontravious Moon reeled in an 8-yard touchdown pass from Johnson with 8:37 left in the third quarter to push the lead to 30-0 following a successful run for the 2-point conversion by Johnson.

Lilly scored on a 14-yard touchdown run with 6:45 left in the third quarter and Johnson converted the extra point to give the Yellow Jackets a 37-0 lead. Rogers capped the scoring in the game with his 80-yard touchdown reception from Johnson with 8:09 left in the fourth quarter.

Lilly said the Yellow Jackets can’t let off the gas with the most important region games of the schedule lined up in the next three weeks.

“Hopefully we can continue the streak,” Lilly said.

The quartet combined to break the 100-yard rushing mark in the game, but Francis Marion couldn’t capitalize on a couple of big plays in the second half to get on the scoreboard.

Damion Evans reeled in a 32-yard pass from Turner midway through the third quarter to move the ball deep into Vincent territory, but Francis Marion couldn’t capitalize after back-to-back 15-yard penalties forced the Rams into a fourth-and-21 situation.

Herring broke free for a 53-yard run in the fourth quarter to give the Rams a first-and-goal situation at the Yellow Jackets’ 9-yard line, but Turner had a pass intercepted in the end zone on fourth down to seal the shutout.

FROM STAFF REPORTS The Vincent High School volleyball team split a pair of matches with Victory Christian and Fayetteville in... read more