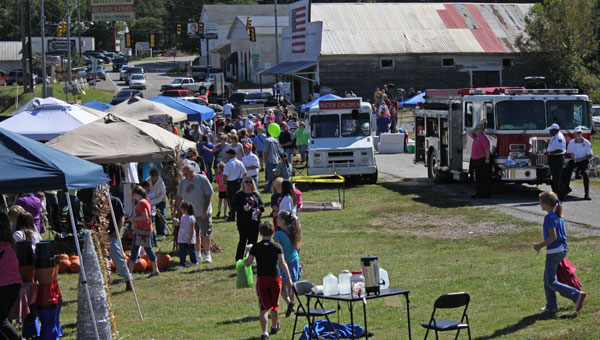 CHELSEA – Hundreds of people enjoyed the fall weather, live music and vendors at Chelsea City Hall during the first Chelsea Day in years on Oct. 1.

“We have a wonderful turnout,” said Scarlett Walker, organizer of the event and member of the Chelsea Band Booster Club. “We definitely plan on having it again next year. It all depends on what day the Alabama and Auburn game is. We can’t plan it for that day.”

The event was sponsored by the Chelsea Band Booster Club, and proceeds from the band’s concession stand and vendors fees were donated to the band.

The grassy area in front of Chelsea City Hall held 68 vendors selling anything from arts and crafts to food to clothing and produce. The Chelsea High School band entertained the crowd, along with the cheerleaders.

Chelsea Mayor Earl Niven said it was a “great event,” while he held a bag of his favorite festival food: peanut brittle.