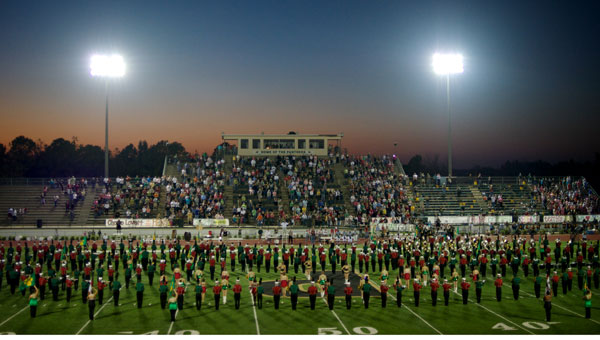 Members of the Pelham High School and Thompson High School marching bands perform a joint pregame before the 2010 game between the two schools. (File)

Every year before the Panthers and the Warriors football players take the field for the heated Battle for U.S. 31, thousands of fans pack into either Larry Simmons Stadium or Ned Bearden Stadium and polarize themselves between seas of red or green.

But a visit to the game venue a few hours before kickoff reveals a different atmosphere. Band members decked out in PHS and THS attire can be found chatting with each other, sharing a meal and working to perfect a common goal.

Since 2001, the two bands have taken the field together to blow spectators away with a university-like sound during a joint pregame show. The sea of more than 400 band members on the field at the same time provides a stark contrast to the atmosphere after the bands take their respective sides of the field after kickoff, said THS Director of Bands Jon Bubbett.

The bands began performing the joint pregame three days after the Sept. 11, 2001 terrorist attacks. Since then, the performance has become a yearly tradition, Bubbett said.

“There was a huge nationalistic feeling after 9/11 that we haven’t experienced since Pearl Harbor, to be honest,” Bubbett said. “We selected an America theme for that first pregame show, and it has grown every year since then.”

Because Alabaster and Pelham share boundaries, many members of the two bands are friends and support each other when the schools attend the same band competitions, said PHS Director of Bands Jeff Burnside.

“It’s a pretty interesting rivalry between the two bands,” Burnside said. “They are extremely supportive of each other. Each band gives the other a standing ovation when they happen to go to the same competitions.”

A few hours prior to the joint pregame, the two bands meet at the stadium hosting the game and practice the show before eating dinner together. Burnside said the practice helps build camaraderie between the two bands despite the heated gridiron rivalry.

“It’s unique because the band kids can put the rivalry aside and unify for that performance,” Burnside said. “Everyone wants bragging rights all the time, but this is a chance for them to get along.

“The teams and the fans don’t always get along, but the band kids always do,” Burnside added.