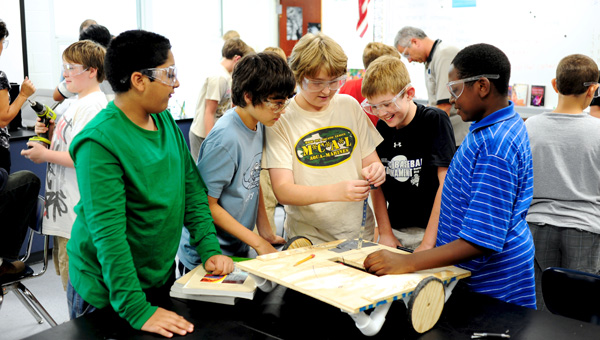 This year, Berry has 48 in the club — and all 48 are working together to build a robot for UAB’s Building, Engineering and Science Technology competition this Saturday, Oct. 8 at Bartow Arena. There, the Berry club will compete with 24 other schools. Last year, Berry came in seventh overall in the school’s first year of competition.

Kathe Howard, one of the club’s sponsors, said students have been working several nights a week for the past six weeks to build the robot.

“They come in, and they are ready, willing and able,” Howard said. 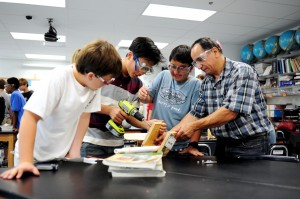 For the competition, each school must come up with a corporation name and marketing plan. Each corporation is given a task: build a robot sophisticated enough to capture escaped “mutant” bugs.

The bugs are actually made out of different materials, such as Styrofoam and PVC pipe. Some of the bugs are electronic and can move, Howard said. 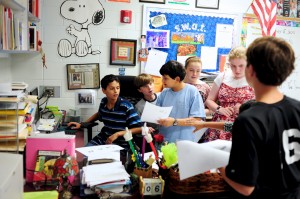 Marketing team members from the Berry Bug Huggers work on their part of the process, which includes selling the robot, on Oct. 6. (Reporter Photo/Jon Goering)

Howard said how the robots perform is only part of the competition. Judges also look at a team’s marketing PowerPoint presentation, a team’s exhibit at the arena, how well team members respond to questions from the judges, a team notebook documenting the process of designing and building the robot, and spirit and sportsmanship.

Luke Boyett, an eighth-grader at Berry, said he is part of a group working on the robot’s grip mechanism. He said he wanted to work on that to stretch his knowledge.

“The gripper, in my opinion, is a little more challenging than some of the others,” he said.

Boyett, who wants to eventually join the Army and perhaps study aerospace engineering, said the most fun part of competition is watching the robot work.

“It’s really suspenseful watching your robot,” he said. “You don’t know if something is going to go wrong.”

Howard said the students secured 36 sponsors from the area to pay for competing.

“We got no money from the school district. It was all done by (the students),” she said.

Howard said the robotics club is the perfect activity for kids looking to learn beyond the classroom.

“This gets those children that are at the top, that need to be challenged more,” she said.

By KATIE MCDOWELL / Lifestyles Editor The Shelby County Board of Education signed documents to borrow $117 million at a... read more