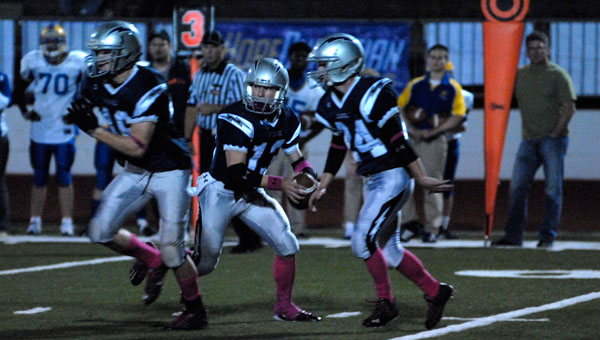 PELHAM — Evangel Christian School sophomore David Shepard raced into the end zone for a 45-yard touchdown after picking off a pass Oct. 7 against rival Hope Christian.

His Lightning teammates and coaches chased him down the field with no time left on the clock.

It was a fitting end to Evangel Christian’s 46-8 win over the Eagles, which sent the Silver and Gold helmet back to Alabaster after it spent one year in Pelham.

“It’s back home, baby!” Evangel Christian coach Del Clayton told his players after the game. “It’s going back on top of the trophy case where it belongs.”

The Lightning, who earned a spot in the Alabama Christian Sports Conference championship game with the win, jumped out to a 28-8 lead after the opening quarter and didn’t look back in the victory.

Evangel Christian senior running back Josh Flanders rushed for 168 yards and two touchdown on eight carries in the win. Grant Webster finished with 97 receiving yards and a touchdown on two receptions. Nate Scott completed 4-of-5 passes for 174 yards and two scores. Micah Hoge led the Lightning with seven tackles.

Flanders gave the Lightning an early lead with his 47-yard touchdown run with 7:22 remaining in the first quarter. Scott successfully ran it in for the 2-point conversion to give Evangel Christian an 8-0 lead.

Scott scored 17 seconds later, following an onside kick by the Lightning, on a 33-yard touchdown run to push the Lightning’s lead to 14-0.

Hope Christian cut the lead to 14-8 following a 17-yard touchdown run by Nafe and a successful 2-point conversion rushing attempt by Spence with 5:20 left in the opening quarter.

Following a scoreless second quarter, the Lightning took a 34-8 lead on a 4-yard touchdown run by Hayden Brown with 10:12 left in the third quarter.

Mason Murphy scored on a 44-yard touchdown run with 1:10 remaining in the game to push the lead to 40-8. Shepard’s 45-yard interception return for a touchdown with no time remaining capped the scoring in the game.

Hope Christian coach Mark Rettig has been on both sides of the rivalry game.

He remembers the exuberant feeling the Eagles experienced a year ago after picking up two wins over the Lightning. He said the Eagles were “disappointed” after handing the Silver and Gold helmet, a prized possession, back to the Lightning, but Evangel Christian deserved it after a hard-fought victory.

“(Evangel Christian) played some ball,” Rettig said. “Our guys have a lot to work on.”