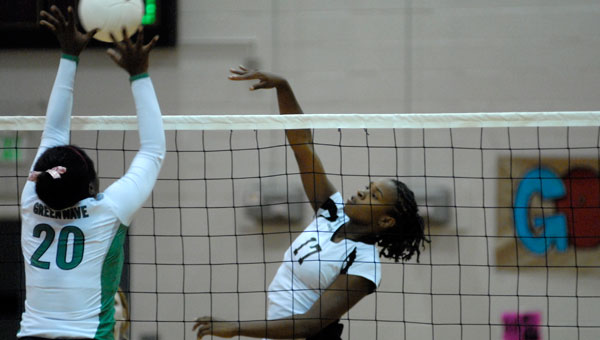 Senior Haley Payton was also named to the all-tournament team.

Indian Springs struggled early in each set, falling behind by a sizable margin in each game.

Leeds opened the match with a quick 12-3 lead in the first game. Hardy capped a 4-0 run by Indian Springs with a kill to cut the margin to 23-17, but Leeds closed out the game with back-to-back points to clinch a 25-17 win in the opener.

Leeds started the second game with a 9-2 run. Indian Springs rallied to take its first lead in the match, 15-14, following a kill by Hardy off an assist by Plouff. Plouff again gave Indian Springs a 19-18 lead with a service ace, but the Green Wave responded with a 5-0 run and coasted to a 25-21 win in the second game.

Leeds jumped out to a 6-1 lead early in the third game. Indian Springs struggled to keep pace and a kill by Jessie Hook turned out to be the final point for her squad after Leeds slammed the door shut with a 6-0 run to clinch a sweep with a 25-13 win in the third game.

Indian Springs struggled with Leeds senior Danyelle Everson, who was named the tournament’s most valuable player. Everson finished with a match-high 12 kills to go along with six service aces.