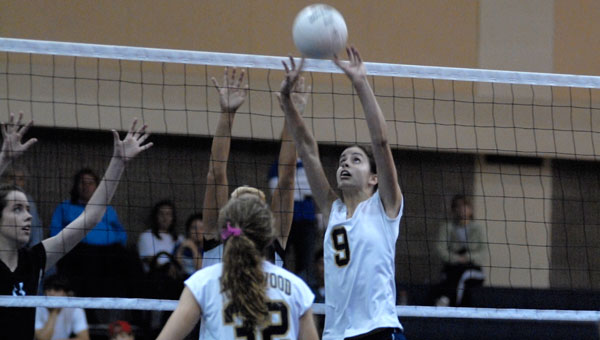 Nasworthy plans to share her wisdom with her youthful teammates, including many who are about to get their first taste of postseason volleyball after helping the Lions clinch the Alabama High School Athletic Association Class 5A, Area 7 tournament title Oct. 11 with a 25-13, 25-21, 26-24 win over rival Chelsea.

The first step to a return trip to the Elite Eight begins Saturday when the Lions host a Class 5A region tournament.

Nasworthy led the Lions (22-21) with 13 kills in the Class 5A, Area 7 title match. Nasworthy also posted six digs and one block.

Marbut led the Hornets with eight kills in the victory.

Calera High School sophomore A'Kia Harris finishes an attack during the Eagles' win over West Blocton in the semifinals of... read more