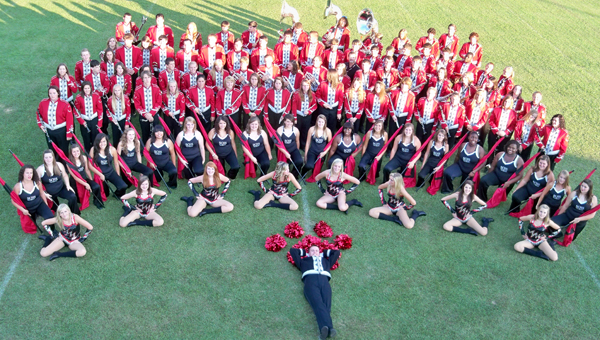 “That’s what Shelby County is known for,” SCHS band director Tom Grigsby said. “Our kids like it and our crowds seem to like it.”

Apparently, so do judges at marching competitions.

Earlier this month at the Lake Martin Invitational, the band’s performance included “Thunderstruck” by AC/DC and “Michelle” by the Beatles. For its finale, the band played a three-song combo: Def Leppard’s “Photograph,” Led Zeppelin’s “Immigrant Song” and Stravinsky’s “The Firebird.”

Shelby County received the highest overall score among 16 other bands. The band had the highest scores in marching, music and general excellence, as well as the most outstanding woodwind section.

Kendra Shaw, who plays mellophone, was named most outstanding soloist for her play during “Photograph.”

“I was tickled to death,” Grigsby said. “The kids were really excited.”

The wins came after a lot of hard work, Grigsby said, beginning with band camp in the summer, practice four days a week after school and performances during Friday night football games.

Lake Martin was the last marching competition of the season, but the band will continue performing at football games and march in the Columbiana Christmas parade Dec. 1.

The band’s fall concert is Oct. 27 at Columbiana’s First Baptist Church. Its Christmas concert is Dec. 4 at the SCHS auditorium.

By NEAL WAGNER / City Editor Alabaster will donate nearly $15,000 more to the schools in its city limits than... read more