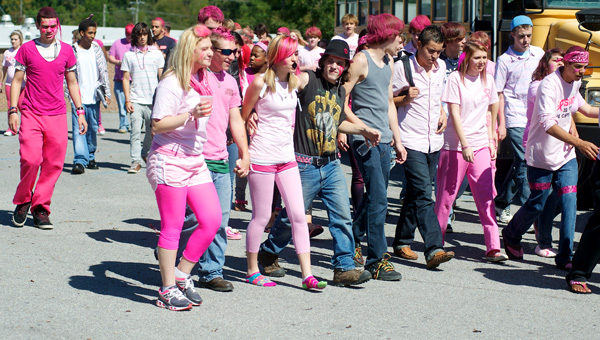 Pinked out School of Technology students walk around the school's campus on Oct. 14. (Reporter Photo/Jon Goering)

COLUMBIANA – As pink-clad students at Shelby County School of Technology walked around a parking lot Friday afternoon to raise money to fight breast cancer, Dell Moody sat in a wheelchair and smiled.

The Columbiana native and retired educator is battling breast cancer. She came straight from chemotherapy to the school’s 2nd annual Pink Out Day.

“Teenagers are so compassionate,” said Moody, who spent the last seven years of her 35-year teaching career at SOT. “They have the biggest hearts.” 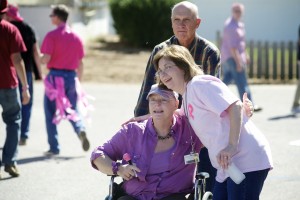 Dell Moody, a former teacher at SOT who is suffering from breast cancer, is greeted by Michelle Bullock, a science teacher at the school, while her husband, Freddie Moody, looks on. (Reporter Photo/Jon Goering)

Students took that compassion to new heights this year. Along with pinking out the campus, the school’s Student Government Association helped pink out Columbiana.

SGA officers Haley Downs, Dana Lee and Logan Nichols took an excused absence from school and went literally door-to-door to Columbiana businesses, asking each one to pink out and raise money for the cause.

Pink ribbons and balloons could be seen across the city.

Two gas stations competed to raise the most money. A grocery store put tip jars at every register. A thrift store pledged 10 percent of the day’s sales.

Kim Estill, the SGA sponsor, came up with the idea for a pink out day in 2010 and challenged the SGA to make it happen. With just two weeks planning, the inaugural pink out raised about $500.

This year is projected to raise thousands of dollars, Estill said, adding it wouldn’t be possible without support from local merchants.

“With the way the economy is right now, to be able to pull businesses in and have them help us is huge,” she said.

Downs, the SGA president, challenged all county high schools – public and private – to host fundraisers in the next two weeks, if they haven’t already.

Pink Out Day ended with the Walk for the Cure around the parking lot, where Moody watched from her wheelchair.

None of the school’s current students had Moody as a teacher. It didn’t matter.

“Several of them have come up to me,” said Moody, who taught for 29 years at Shelby County High School before ending her career at SOT. “I don’t know them personally. They don’t know me. But they just think ‘I’ll bet she’s here because she has breast cancer.’ They know that much.

“How sweet. Teenagers are like that. They have big hearts.”

Moody was first diagnosed with breast cancer in 2003 and again in May 2011. She’s received 10 radiation treatments in the in the last six months. Friday was her 10th chemotherapy treatment.

Students didn’t know her, she said, but likely do know somebody battling breast cancer or other life-threatening ailments. 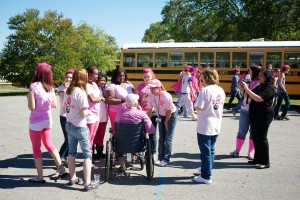 Dell Moody, a former teacher at SOT who is suffering from breast cancer, is surrounded by SOT students and faculty. (Reporter Photo/Jon Goering)

“We will always know someone who has some sort of dreaded disease,” Moody said, smiling.