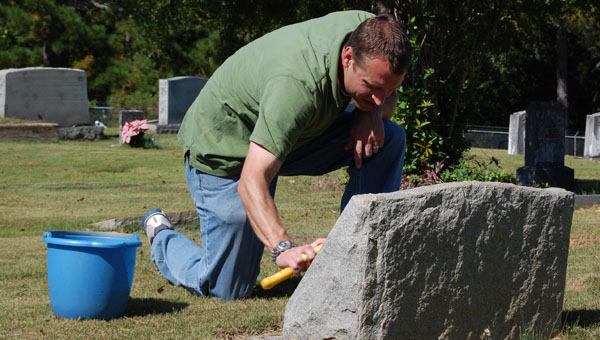 COLUMBIANA – Columbiana City Cemetery looks a lot nicer today, thanks to a volunteer service project by the Church of Jesus Christ of Latter-day Saints.

About 110 church members from four Shelby County locations worked throughout the day Oct. 15 to clean up the cemetery. Most of the work focused on headstone and marker repair.

“Providing service to a community is a wonderful thing for us to do, said Nathan Thompson, a Chelsea resident and member at Columbiana LDS. “We honor those who have gone before us and blazed a path for us.

“It’s about coming out, providing service, helping the community and being an active part of the community,” Thompson added.

It’s physically demanding work but worth the effort, he said.

“You go home tired and a little dirty,” he said, “but you feel good about what you’ve done at the end of the day.”

Each year, usually in the spring, all LDS churches in the Southeast provide a “Day of Service” to the community, according to Clem Muck, a public relations specialist and LDS church member.

The cemetery project was originally scheduled for April 30. In the deadly aftermath of the tornadoes that ripped across the state just a few days earlier, the “Day of Service” had to be postponed. Church members diverted their efforts to fulfilling the urgent and immediate need of helping storm victims.

Bishop Jeff Atkinson, of Oak Mountain LDS, said it was nice to finally get to work at the cemetery.

“We’ve been looking forward to it for quite a while,” he said.

From helping tornado victims to cleaning up cemeteries, community service is an important part of the church’s mission, Atkinson said.

“It’s something that we try to talk a lot about,” he said. “We believe in providing service to others, just like Jesus did. He served other people. We’re trying to emulate his example.”

Columbiana Mayor Allan Lowe said the Columbiana LDS church has always been active in the community.

“When they approached me and asked if there was anything in the city they could do, we came up with this idea,” Lowe said. “I was excited, but there was no way I could appreciate how large of a scale this project would be.

“It’s something that’s needed to have been done for a while. We’re grateful that so many people from the community and from outside the community took the day off to spend it with us so we can take care of the folks who used to take care of us.”