Calera goes pink for the day 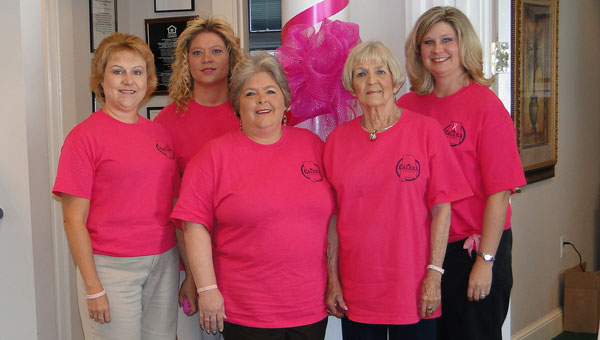 With this in mind, Calera is partnering with the Breast Cancer Research Foundation of Alabama (BCRFA) to lead the way in finding a cure by declaring the month of October “Calera Goes Pink!” During the month, businesses are joining forces to raise money to help find a cure.

Specially designed hot pink T-shirts can be purchased for $10 at city hall, fire and police departments, Calera High School, First United Security Bank, Barbara’s Candles and the chamber office. Retailers are selling “in honor of” or “in memory of” pink ribbons and displaying them in storefront windows. All proceeds will be sent to BCRFA who, in turn, supports the UAB Comprehensive Cancer Center’s effort for research and treatment that benefit women across the nation.

Two events are planned to spotlight the campaign: On Oct. 28, local breast cancer survivors and their families will be recognized at Calera High School’s final home game.

Spectators are encouraged to wear the pink T-shirt to the game. Survivors and families wishing to participate should contact City Hall by Oct. 21 at 668-3803 or cityclerk@calera.org to register.

The other event is a two-person team golf tournament hosted by Timberline Golf Club on Nov. 3. Player registration is $80/person. Golfers must have a USGA handicap and be registered by Oct. 21.

Interested participants can contact Timberline at 668-7888 or Timberlinegc.com. Registration forms can be obtained by email at kkiefer50@gmail.com.

“Timberline Golf Club Head Golf Professional Jose Kruse’s wife was diagnosed with breast cancer two years ago,” Kiefer said. “I played in that tournament, and because of my passion for breast cancer awareness ,I approached Joe about incorporating the tournament into a city event. I spoke with Mayor Graham, he enthusiastically embraced the idea and the theme ‘Calera Goes Pink!’ was birthed.”

Dolly O’Neal, BCRFA co-Founder, said Calera’s grassroots fundraising effort is a model for what a community can do.

“The City of Calera shares BCRFA’s passion for keeping the money raised in Alabama, and we are thrilled to see so much commitment to saving lives through breast cancer research,” she said.

Mollie Brown can be reached at dmjhb1@bellsouth.net