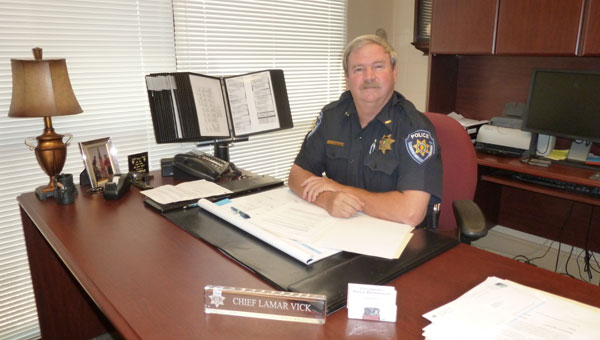 Keeping Columbiana safe is the responsibility of Chief Lamar Vick and his dedicated police force of eight full-time and two part-time policemen.

Vick calls himself a working chief, for he patrols the streets and knows his community well.

Vick grew up in Wilsonville and graduated from Shelby County High School.

He has been working since he was 14 and has an incredible work ethic. Vick joined the Army at age 18 and was sent to the Panama Canal where he got his first taste in law enforcement as his infantry unit was attached to a MP unit.

Vick came home and went to Central Alabama Community College, where he graduated as a paramedic.

He worked for a private ambulance company and was on the Wilsonville Volunteer Fire Department for 30 years.

In 1983, Columbiana Police Chief Howell Horn hired Vick as a policeman, and Vick earned his Alabama Law Enforcement certification. In 1985, he became Wilsonville’s police chief until 1992 when he returned to Columbiana as a patrolman.

He was promoted to sergeant, then acting chief, and finally chief in 2006 by Mayor Allan Lowe.

“I am proud of my staff,” said Vick. “They are good people and a good mix. Columbiana is a safe town with little crime, but in today’s world, it is not like it used to be. I advise people to use common sense and be careful.”

Vick holds monthly training sessions where he always reminds his staff to keep with the basics: listen more than talk and be observant. His force is divided into drug , traffic, homicide, and investigation divisions .

“Shelby County works together,” said Vick. “We have a great support and communication system.” Once a month he meets with the D.A., other Shelby County chiefs and the sheriff to keep up with what is going on in the county.

Vick also says he has a great working relationship with Principal Gene Rogers and Shelby County High School. This is a community that cares about its youth and works together to help those in need.

Never was a time more evident of the town’s support when Vick lost his beloved wife Amanda of 30 years.

“Life is too short,” said Vick. “I do not know what I would have done without the support of my children and my department during that difficult time. They are like family to me.”

A dedicated, humble man, Columbiana is honored to have Lamar Vick as its police chief.