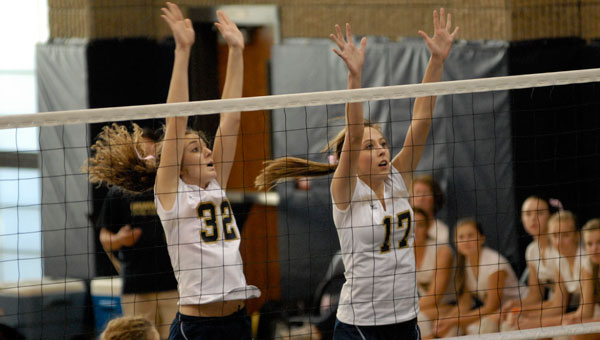 With a raucous crowd cheering for the Lions, the veteran knew she and her youthful teammates could feed off the energy coming from just a few feet away from the net.

Following Briarwood Christian’s 22-25, 25-23, 25-23, 25-16 win over Spanish Fort, Nasworthy credited the Lions’ student section for helping the team clinch a return trip to the Class 5A Elite Eight. The Lions will face Curry in a Class 5A quarterfinal match Oct. 26 at 11 a.m. at the Pelham Civic Complex.

“I think (Spanish Fort) was a really good test,” Nasworthy said. “Our fans really pulled us through.”

Junior Mariah Light led the Lions with 15 kills in the victory. Light also recorded one dig.

After dropping the opening set the Toros 25-22, the Lions (26-21) swept three consecutive sets to send the visitors back to Mobile.

Briarwood Christian got the rally started in the second set, which ended with a kill by Nasworthy that sent the crowd into a frenzy.

Briarwood Christian coach Tien Le, who was going up against his longtime mentor in Tammy Richardson in the sub-state match, said he was proud of the Lions for rallying after the first set.

“Spanish Fort played really, really well,” Le said. “I’m very proud of my girls. My assistant coaches also did a great job about pointing out adjustments we needed to make. Without them, no doubt we would have lost.”

Eagles headed back to Elite Eight