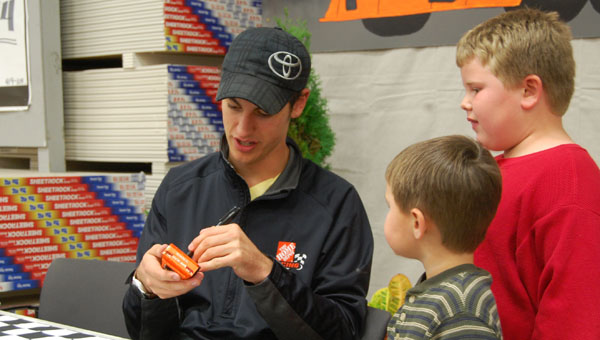 A few hours after Thursday’s electronic fuel injection tests for the Good Sam Club 500, Logano signed autographs and took pictures with fans at Home Depot, sponsor of his No. 20 car.

“We’re learning a few new things,” he said of the EFI tests. “Some of the rules have changed for this weekend.”

Logano, 21, has had four top 10 finishes in five starts at Talladega.

“We’ve had good runs there for sure,” he said. “A lot of that is just who you’re teaming up with and who you’re working with, making sure you have that chemistry together. Lately, me and (teammate Kyle Busch) have been working together a lot – and plan to stay the same this weekend.”

In an effort to discourage two-car drafting, NASCAR has changed a couple rules for the race.

By increasing the size of restrictor plates and recalibrating pressure relief valves on the cars’ cooling systems, the amount of time two cars can stay hooked together could be shortened. Also, lubricating bumpers won’t be allowed.

“You’re not going to be able to take that away from us, as much as you try to make the cars not be able to do it. We’re all racers. We’re going to go the fastest way we possibly can. Nothing’s going to change.”

Two-car drafting may be different, he said, “but this is going to be the new way, and I don’t think we’re going back the other way.”

“I enjoy them,” he said. “It’s interesting to see what they all say, and they bring different things to sign.”

Logano signed autographs for an hour and a half. More than 60 fans were already lined up to meet him when he arrived.

Hueytown’s Katie Worrell, 21, was first in line. She showed up 1 p.m., five hours before the signing.

“I was here when they started setting it all up,” she said. “I was just kind of standing around looking like an idiot.”

Meeting her favorite driver was worth the wait, said Worrell, a Logano fan since he first started racing in the Sprint Cup Series.

“He’s my age out there with those big boys,” she said. “I was rooting for him all the way.”

Jimmy Johnson, age 36, has won the last five championships. A crash last weekend at Charlotte dropped him to eighth in the standings, 35 points behind leader Carl Edwards and 17 points behind fourth-place Busch.

Can Johnson catch up?

“I wouldn’t bet against the guy, but there are a lot of good cars out there this year that can do it,” Logano said. “I think my teammate (Busch) has a really good shot at it.”