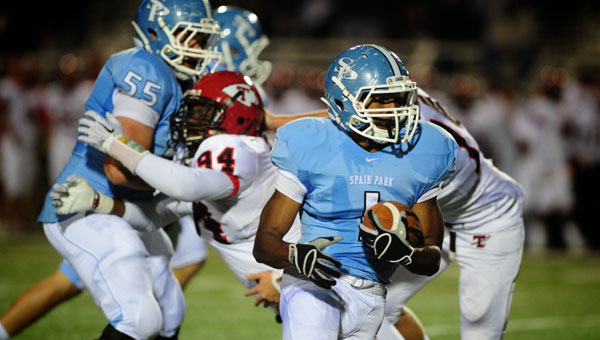 With the Jaguars’ postseason hopes riding on the outcome, Mwaituka and his teammates didn’t need any extra motivation.

“We knew we had to come out with a high intensity,” Mwaituka said.

Spain Park kept its playoff chances alive with a 38-0 shut out against the Warriors, who dropped to 0-7 in Class 6A, Region 6 play in coach Caleb Ross’ first season at the helm.

Mwaituka reeled in a 7-yard touchdown pass from Mullens with 9:30 remaining in the opening quarter and Jake Hoffman added his first extra point to give Spain Park an early 7-0 lead.

The Jaguars carried a 28-0 lead into the locker room at halftime following a 4-yard touchdown pass from Mullens to Hunter Kahn and another extra point by Hoffman with 6:19 left in the second quarter.

Thompson managed only three first downs in the opening half.

The Jaguars (5-4 overall, 4-3 in Class 6A, Region 6) still need a win against Clay-Chalkville in a non-region game Oct. 27 to feel comfortable about its playoff hopes.

Lindsey said the undefeated Cougars will provide a huge test for his Jaguars.

“It’s a chance to prove ourselves,” Lindsey said.

Ross, who came to Thompson after spending time as the offensive coordinator at Prattville, said he noticed a lot of progress in his team despite its lack of a region victory.

“It’s a tough region,” Ross said. “I knew that coming in. We’re trying to rebuild the program. We’re heading in the right direction.”