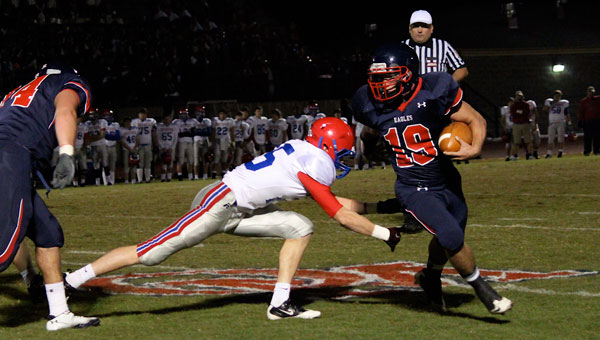 “(Vestavia) won the ball game on the offensive and defensive lines,” Oak Mountain head coach Jeff Harris said. “My hat’s off to them for playing a good game.”

The Rebels wasted no time, scoring on their first drive on with 32-yard touchdown run with 9:38 remaining in the first quarter. The Eagles jumped back, driving 64 yards downfield and relying heavily on senior running back Bradley Bostick, but the Eagles failed to capitalize after a 33-yard Mitch Mathias field goal missed the uprights.

Despite a defensive stand by the Eagles, the Rebels crept back into Oak Mountain territory on their following offensive drive, but senior Cameron Bice sacked the Rebels quarterback, forcing a fourth down play that culminated with a missed Vestavia field goal. The Eagles took over at their own 20-yard line but went three-and-out, and on the first play of its next drive, Vestavia scored on a 67-yard touchdown run, extending its lead to 14-0 with 7:39 remaining in the first half.

Oak Mountain went three-and-out on its next two offensive drives, and a 9-yard touchdown run gave Vestavia a 21-0 lead to close out the first half.

A sack by senior Justin Woodall set Vestavia up for another failed field goal attempt, but the Rebels found the endzone on their ensuing offensive drive, extending their lead to 28-0 with 2:02 remaining in the third quarter following a 27-yard touchdown pass.

“We have always prided ourselves on battling for four quarters and not rolling over,” Harris said, “and I told them to stick with it, just to keep playing and remember that we’re in this together.”

A scoreless fourth quarter was marked by the Eagles’ fight as they crept closer to the endzone with each drive, reaching Vestavia territory on their last three drives of the game. Despite breakaway runs by both junior quarterback Jake Adams and Bostick, the Eagles fell short and ended the night scoreless.

“I told them that we were going to get guys in the ballgame that haven’t had a lot of playing time this season, and we were able to do that, so there was an opportunity for some of them to get some experience,” Harris said. “I feel like they played their hearts out for four quarters, and we got beat by a better team. I think that we’ve gota long ways to go.”

The Eagles face Pinson Valley at home Oct. 28 to close out the regular season.