CHELSEA – After losing their home to the April tornado that tore through Pratt City, Laloria and Maurice Marsh began to pray.

“We prayed about which direction to go in, and God led us to Chelsea,” Laloria Marsh said. “It takes about 50 minutes with traffic (to get home from work), but I know what I’m going to home to. It’s a beautiful home, and a nice, quiet community. It’s perfect.”

The couple and their two children, 9-year-old Maurice II and 12-year-old Maurica, along with other members of the Marshes’ family were in the basement of their house in Pratt City when the “whole house collapsed,” Marsh said.

“It was devastating. We saved a few papers we were able to find and very few pictures,” Marsh said. “It’s very scary. I still have some flashbacks. I thank God we all made it out. You can replace things, but you can’t replace the family if something happened to us.” 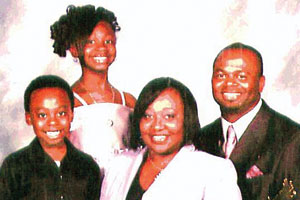 “They love it,” Marsh said. “It’s a big difference than where they were going — Birmingham City Schools. They get excited every day.

“It’s much better than the city. It’s much different,” she added. “We’ve seen the difference in the schools and the systems and the teachers and how organized Chelsea schools are.”

Laloria, who works for the Jefferson County Department of Revenue, and Maurice, who is a salesmen for Motion Industries, were both raised in Warrior and have now been married for 14 years.

“We met in high school. We’re both from Warrior, and his parents lived maybe five minutes away from mine. We kind of knew each other,” Marsh said. “We started dating and everything in high school.

By CHRISTINE BOATWRIGHT / Staff Writer MONTEVALLO – A University of Montevallo student was killed in a car accident at... read more