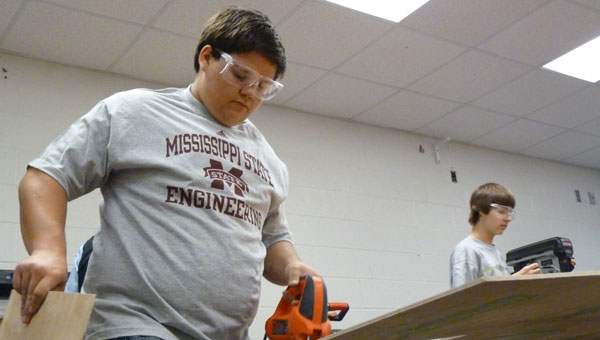 Zack Lamantia, left, and Camden Cutright work on part of a project for the Spain Park robotics club. The club will compete at the Southeast BEST competition at Auburn. (Reporter photo/Amy Jones)

When Catherine Ritchey, Os Nakayama and the other members of the Spain Park robotics club found they had won first place at the UAB Building, Engineering and Science Technology competition Oct. 8, there was only one thing on their minds: redemption.

Last year, Spain Park made it to the Southeastern BEST competition at Auburn University, where the club finished a disappointing 15th out of 60, missing a chance to go to national competition, said Ritchey, a senior.

This year’s club members won’t accept that, she said.

“This year, we definitely intend to do much better at Auburn,” she said. “We don’t expect to win nationals or anything, but we expect to get there because we put so much work into it. We wanted to prove we could do it without last year’s seniors.”

The top six teams at the Auburn competition, Dec. 1-3, will go to nationals in Anaheim, Calif. The national competition will be in the spring.

For the competition, each school must come up with a corporation name and marketing plan. Each corporation is given a task: build a robot sophisticated enough to capture escaped “mutant” bugs.

The bugs are actually made out of different materials, such as Styrofoam and PVC pipe. Some of the bugs are electronic and can move.

How the robots perform is only part of the competition. Judges also look at a team’s marketing PowerPoint presentation, a team’s exhibit at the arena, how well team members respond to questions from the judges, a team notebook documenting the process of designing and building the robot, and spirit and sportsmanship.

Ritchey said completing the project took an average of 10-15 hours per week for the past six weeks from around 25 devoted club members. The club is sponsored by Scottie Wilson.

Nakayama, a senior, said the Spain Park club members have used their robot to reach out to the community by going to local schools and making presentations on the robot and the process of building it.

“They were all so intrigued that you could just build this incredible thing out of just wood and motors,” he said.

Ritchey said that while the club is proud of its awards, there’s one more honor she believes is equally important.

“One of the awards we’re most proud of is that Ms. Wilson was nominated for best teacher at the competition, and she definitely deserved that,” Ritchey said. “She spends so much time here and so much time helping other schools.”

By NEAL WAGNER / City Editor The Pelham City Council recently donated more than $129,000 to the five schools in... read more