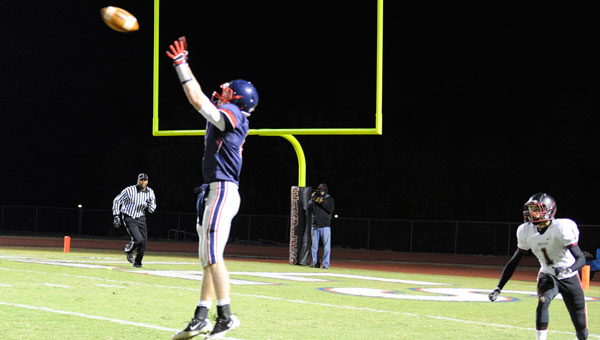 Oak Mountain High School sophomore Heath Quinn reels in a pass before heading into the end zone for a touchdown in the Eagles' loss Oct. 28. (Contributed/Barry Clemmons)

NORTH SHELBY — Oak Mountain High School football coach Jeff Harris wasn’t sure how his players would react when the heart and soul of the team, senior running back Bradley Bostick, left the game with a knee injury in the first quarter Oct. 28 in the Eagles’ final regular season game against Pinson Valley.

When Bostick’s teammates had a few minutes to accept the news that he wouldn’t be able to return to the game, Harris got his answer.

The Eagles rallied from an 11-point deficit to take Pinson Valley down to the wire, but Oak Mountain came up just short in a bid to send the senior class out with a win in a 14-10 loss to the Indians.

The Eagles converted three third downs and one fourth down before Scott Hester couldn’t hang on to a pass from Jake Adams deep inside Pinson Valley territory on a fourth down in the final two minutes.

“When (Bostick’s) injury happened, an initial shock ran through the team,” Harris said. “I’m very proud of the guys that filled in. The guys played hard and gave us a chance to win it in the end.”

Following a three-and-out by the Eagles on their opening possession, Pinson Valley capped a nine-play, 69-yard scoring drive with a 1-yard touchdown run to take an early 7-0 lead with 8:01 remaining in the first quarter.

Both offenses stalled until late in the first half, when an 11-yard pass from Adams to Hester set up a 37-yard field goal by Oak Mountain kicker Mitch Mathias, which cut the deficit to 7-3 with 3:43 remaining in the opening half. Mathias’ field goal capped a seven-play, 62-yard scoring drive.

Pinson Valley responded quickly with a 12-play, 83-yard scoring drive of its own. The Indians took a 14-3 lead following a 6-yard touchdown pass with 57 seconds left in the second quarter.

The Eagles cut the deficit to 14-10 with 7:40 left in the third quarter when a 27-yard run by Barrett Gossett set up a 19-yard touchdown pass from Adams to Heath Quinn. Mathias added the extra point to cut the Pinson Valley lead to four points.

Oak Mountain drove deep into Pinson Valley territory a few minutes later in the third quarter when Hester reeled in a 49-yard pass from Adams. However, the Eagles’ offense stalled at the Indians’ 20-yard line and Mathias’ 37-yard field goal attempt came up just short, which left the Eagles trailing 14-10.