Warriors down Cavs in final game 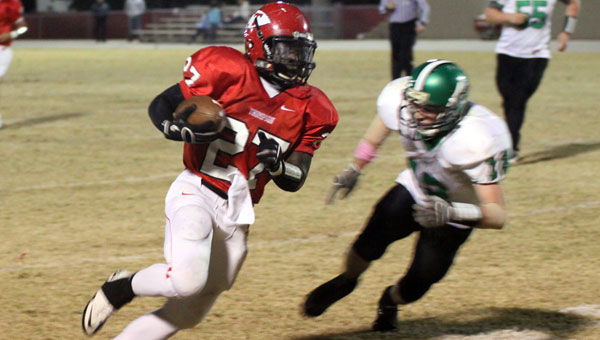 ALABASTER — The fireworks were going off on the field and in the air at Larry Simmons Stadium as the Thompson Warriors claimed an impressive 35-27 come-from-behind win against John Carroll to celebrate homecoming in the final game of the season Oct. 28.

Thompson took a page from the history books as the Warrior rode in and planted the spear at midfield to kick off the contest.

The first half proved to be a replay of most of the season for the Warriors as they moved the ball, yet made critical mistakes.

“We moved the ball well in the first half, but made every mistake you could make,” said Thompson coach Caleb Ross. “The worst mistake of all is that our boys lost their composure.”

Those mental errors and failure to keep attitude in check cost the Warriors 24 points in the first half.

Their only score of the half would come on a five-play, 79-yard drive that culminated with a Dee Tolbert 27-yard run for the score. Matt Nall’s extra point made it 18-7 at that point.

When the Warriors took the field in the second half, they had regained their composure. They also had gained a little swagger while they were in the locker room. Thompson had the ball for three possessions in the third quarter and scored touchdown on every possession.

Starting the half on their own 39-yard line, the Warriors watched John Carroll sack Trey Matherson and set them up with a second-and-18. Matherson then hit Avery Hale for a 23-yard gain and a first down. Hale finished with six catches for 48 yards.

Matherson then targeted Dillon Holsonbeck twice only to have the short yardage taken away on penalties. With Holsonbeck streaking down the middle, Matherson dropped one over his left shoulder for a 38-yard touchdown strike.

The Warriors went back to the ground game on the next possession and Tolbert rumbled 20 yards for his second score of the night. Tolbert also carried the ball in for the 2-point conversion.

With defense making the big hits and coming through the line on every play, John Carroll kept moving backwards. That defensive play was key in keeping the Warriors offense on the field with great field position.

Matherson ran the offense with precision on the Warriors’ third series of the half. Running and passing the ball, he directed his team down the field and with 1:12 left in the quarter, the Warriors took the lead with a Matherson to Tolbert pass for 23 yards. Nall’s extra point made it 28-24.

Matherson finished 20 of 27 for 222 yards and two touchdowns. He also scrambled for 31 yards.

After John Carroll added a field goal in the fourth to make it 28-27, the Warriors got their final score and sealed the win with one play from scrimmage. Tolbert took the Matherson handoff and bounced off several defenders on his way to pay dirt on a 68-yard touchdown run, which capped a 177 yard rushing performance. He also had 48 yards receiving.

“I am so proud of our guys for coming out on top tonight, and we have great momentum to build on going into the off-season,” Ross said.