Sears looking to come to Alabaster 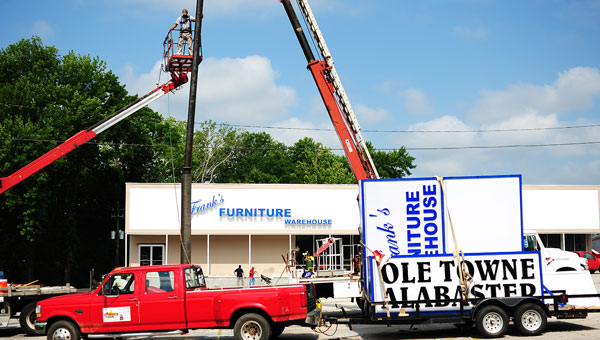 A Sears franchise owner could be bringing a Sears Hometown Store to a portion of the buidling occupied by Frank's Furniture Warehouse off First Street Southwest. (File)

A franchise owner with a Sears store is looking to bring the business to Alabaster, Mayor David Frings said Nov. 3.

Although the business has been looking to locate in Alabaster for the past few years, Frings said the company recently has come “a lot closer” to finalizing its plans.

“Sears has been looking to come somewhere in our city for a few years now,” Frings said.

Frings said the store likely will not be a full department store like the location at the Riverchase Galleria, but rather one of the company’s limited-inventory hometown stores.

Currently, the closest Hometown Store to Shelby County is in Clanton.

Frings said the store could be coming to “any number of locations” in the city, including the Colonial Promenade and a section of the building currently housing Frank’s Furniture Warehouse off First Street Southwest.

The Montgomery-based Aronov development company recently announced plans to bring a 35-acre new shopping center to Alabaster near the southern wing of the Colonial Promenade off U.S. 31.

“We’re excited. Anything to bring more revenue and jobs is good not only for our city, but for surrounding cities and the county as a whole,” Frings said.

Brad Grodi, owner of Z Solutions in Alabaster, works on a customer's car at the shop off Alabama 119 Nov.... read more