CHELSEA – Although he was born and raised in California, Jon Tavares had the dream of attending the University of Alabama. When he joined the Navy, however, he had to delay his dream, and he and his wife, Tammi, kept their family in San Diego.

When the Tavares’ two kids were in fourth and sixth grade, the family picked up and moved to Tuscaloosa for Jon to attend law school at the University of Alabama. After graduating in May 2010 and struggling to find a job, Jon found work at Frontier National Bank and moved his family to a new home in Chelsea.

“So far he enjoys it (his job),” Tammi Tavares said. When he was in the Navy, I never could ask him how his job was because it was so confidential.” 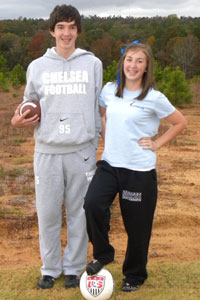 Tammi met her future husband, who is a year older, when she was a senior in high school.

“I was in color guard. He would hang out in the band hall with some of my friends. I thought he was a geek, a total dork,” Tavares said.

During her freshman year of college, Tammi and Jon ended up spending time together with a mutual friend and “something kind of clicked,” she said.

“I’ve heard a lot of people say you always go for the nerds, they’re the nicest,” she said, laughing.

Prior to building their home in Chelsea, the Tavareses had moved 16 times in 16 years.

“We love our new home. We love this new neighborhood,” Tavares said. “My husband wanted a corner lot. The last one available was up on the hill, and no one has picked to build around us, so we’re all by ourselves. It’s been nice. I tell my kids to go outside and play because we can do that now.”

“Right away, they’ve gotten involved in the school.” Tavares said. “It seems like they’re learning more and being more challenged out here.”

Tavares currently works part time at Walmart and takes consumer science and secondary education classes at the University of Montevallo.

“Coming from California, we lived in San Diego, so talk about urban, and we moved out here thinking, ‘This is going to be really small,’ but we really enjoy it,” she said. “We’re like, OK, we’re never moving again.”

FROM STAFF REPORTS An Alabaster resident and substitute bus driver for Shelby County Schools was arrested by the FBI today... read more