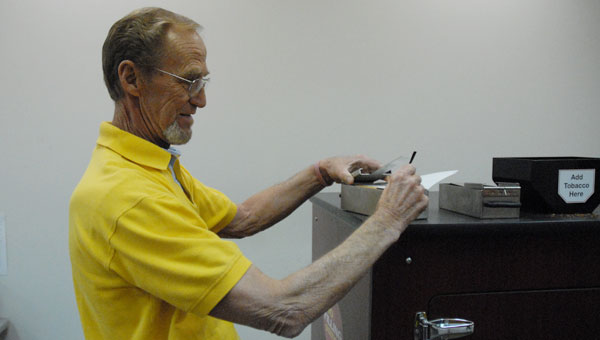 Earlier this year, Bluff Park resident Terry Garrett didn’t think twice about where he was going to open his newest business: My Tobacco Shop.

“I actually operated a business in Pelham 10 years ago. It was a tanning salon,” Garrett said. “My first decision was to come back to Pelham when I was opening the tobacco shop. Not Hoover, not Vestavia or any of those places. I wanted to come to Pelham, Alabama.”

When Garrett opened the business at the intersection of U.S. 31 and Shelby County 52 about eight months ago, he said he was looking to bring a unique shopping experience to local tobacco aficionados.

At the business, customers can select from nine custom blends of tobacco, which are then inserted into the business’s Ryo cigarette machines. The machines are able to roll a carton of cigarettes in eight minutes.

“We can match 99 percent of the cigarettes available on the market today,” Garrett said. “Our tobacco is fresh and all-natural. It doesn’t have any chemicals, fillers, additives or preservatives.

“Now, I’m not saying everyone should smoke, but this is a much better alternative for those who do,” Garrett said. “This is the only business of its kind within 100 miles of here.”

Because the tobacco shop would legally be considered a cigarette manufacturer if it rolled and sold the cigarettes, Garrett said customers always actively participate in the rolling process.

Since opening, the business has seen its customer traffic steadily increase, Garrett said.

“It basically started as four walls and a dream. It’s definitely still growing,” Garrett said. “We are drawing in people from all over the place – even as far away as Clanton.”

FROM STAFF REPORTS For the second-straight season and sixth time overall, the University of Montevallo men’s soccer team will take... read more