Bentley thanks veterans at WOM 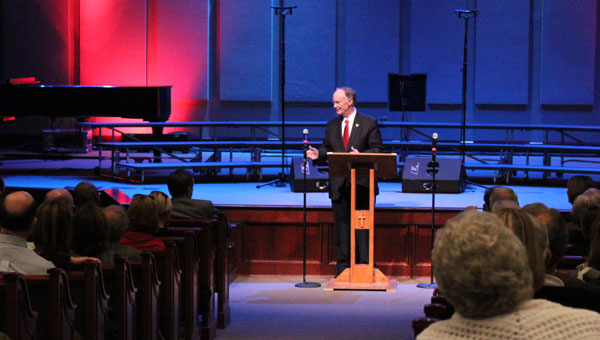 NORTH SHELBY – Alabama Gov. Robert Bentley visited The Westminster School at Oak Mountain to speak about his appreciation for veterans.

The school held its 2011 Grandparents’ Day and Veterans’ Day Program, and the students ran the program by posting the colors, leading the Pledge of Allegiance and the National Anthem and introducing the governor.

Bentley said the state of Alabama is home to 420,000 veterans, and called Alabama a “very patriotic state.”

“If not for veterans, we couldn’t have this meeting,” he said, “because without veterans, we wouldn’t be free. Many of them go through difficult times as they transition into civilian life. They go through stress and depression and don’t want to talk about it, but they need to.”

While Bentley did serve in the military, he was never in combat. He said through his medical practice he saw many patients who had been involved in combat.

In response to the Grandparents’ Day portion of the program, Bentley said he has four sons who gave him six granddaughters. While he calls his sons often, his granddaughters have taught him how to text.

“Continue to pray for me and my wife and the cabinet,” he said. “We want to do what’s right for the state. Because of the great people of the state, it makes me honored to be their governor.”

Montevallo community members fill out a survey after voicing their opinions on how to address the dropout rate issue in... read more