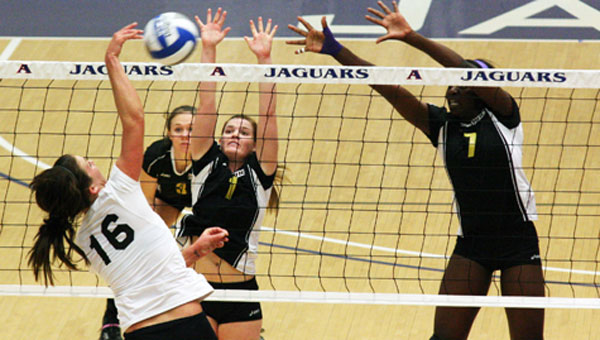 The University of Montevallo volleyball team ended its 2011 season with a 3-0 loss to Flagler College in the Peach Belt Conference tournament quarterfinals Nov. 11.

A trio of hitters led the Falcons, including freshman Michelle Walker, sophomore Manyi Ati and sophomore Michelle Carle. Walker had 11 kills, while Ati and Carle each had 10.

Montevallo hit .212 as a team, but were unable to slow down the Saints offense which hit .316.

The Falcons will say farewell to three seniors including Wotitzky, Garrison and Jessica Guidry. All three have been key pieces in the Falcons lineup over the past few seasons. The trio helped lead the Falcons to the programs first NCAA tournament win last season in the first round of the NCAA Southeast region tournament.

Falcons fall in opening round of NCAA tournament