Jo Flo’s Jungle is coming to Pelham. The citizens of Pelham may wonder where they might find Jo Flo’s Jungle, which sounds like a cool new vine-covered playground for kids.

This jungle does sport lots of green, but no vines. And even though it’s not a playground, Jo Flo’s Jungle is a place for fun. 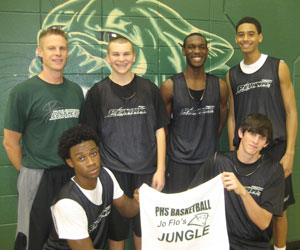 PHS students enjoy supporting one another with many sports boasting a student section or cheering squad. PHS athletes who play other sports, along with student musicians, singers, writers, actors and artists, all have representatives in Jo Flo’s Jungle.

Floyd took over as varsity basketball coach three years ago. At the time, students showed up for games against big rivals, but basketball crowds were usually light. Floyd wanted to bring more excitement to basketball season and get students in the stands.

“Having an intense student section creates a hectic environment for our opposition,” Floyd said. “We want every basketball game to be an event that students want to be a part of.”

“Basketball season is exciting because you are so close to the game. We get in the heads of opposing players because they hear everything we say,” PHS senior and letterman Caleb Turrentine said.

PHS choir participates by having one or more students sing the national anthem for the home games.

“We support PHS basketball and appreciate the chance to be involved,” choir teacher Lynn Jebeles said.

“Pelham’s student section has grown into one of the best around,” said Floyd.

Please come out and experience Jo Flo’s Jungle at PHS.

Giving thanks from the heart