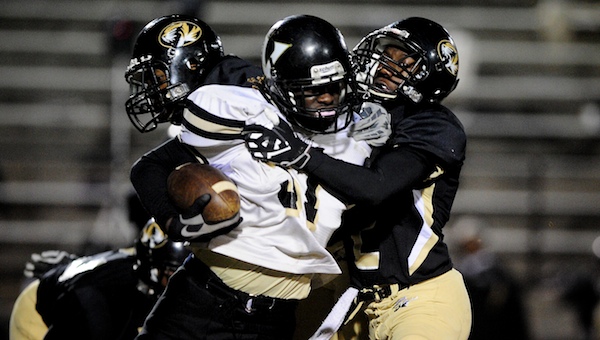 Vincent running back Rodney Groce is taken down by an Elba defender during the Nov. 11 game at Elba. (Reporter Photo/Jon Goering)

ELBA — Members of the Vincent High School football team ran off the field a week ago following an emotionally-charged victory in the first round of the Alabama High School Athletic Association Class 2A playoffs.

The Yellow Jackets experienced a 180 degree turn following a 59-20 loss to Elba in the second round of the playoffs, exiting the field like walking wounded after enduring rigorous battle in a hard-hitting night on the gridiron Nov. 11.

After falling behind 34-0 at halftime to the unbeaten Tigers following a first half filled with turnovers, the Yellow Jackets (9-3) couldn’t come up with an answer for a prolific Elba offense.

“We had too many turnovers in the first half,” said first-year coach Zeb Ellison. “You can’t make mistakes like that when you get in the playoffs.”

Following a three-and-out series on offense to start the game, Elba responded with a 10-play, 51-yard scoring drive. The drive was capped with a 1-yard touchdown run by Cody Hall, which gave the Tigers an early 6-0 lead.

Following the Yellow Jackets’ first fumble in the game by Demauntey Johnson, Donta Rogers reeled in a 35-yard touchdown pass from Austin Johnson to give Elba a 13-0 lead.

A fumble by ShaCorry Lilly, Vincent’s third turnover in the game, was returned 73 yards for a touchdown by Shannon James to push the Tigers’ lead to 20-0. Elba took a 27-0 lead following a 4-yard touchdown run by Darrean Burks.

A 54-yard touchdown pass from Johnson to Rogers with 1:54 remaining in the first half left Vincent with a 34-0 deficit heading into the locker room at halftime.

Elba senior Tyler Anderson returned the opening kickoff in the second half for a touchdown to push the Tigers’ lead to 40-0 before Vincent finally got on the scoreboard.

Sophomore Rodney Groce returned the ensuing kickoff 82 yards for a touchdown with 11:35 remaining in the third quarter. Johnson’s pass attempt on the 2-point conversion attempt fell incomplete, which left the Yellow Jackets trailing 40-6.

Elba responded with another kickoff return for a touchdown, this time by Michael Lindsey, to push its lead to 46-6. A 19-yard touchdown run by Burks midway through the third quarter gave the Tigers a 52-6 lead.

Vincent finally got a little momentum going following Johnson’s second takeaway of the night on defense. A 2-yard touchdown run by Lilly capped an eight-play, 30-yard scoring drive with 44 seconds remaining in the third quarter. Johnson’s pass attempt on the 2-point conversion fell incomplete, which left the score at 52-12 at the end of the third quarter.

Elba scored its final touchdown on the second play of the fourth quarter on a 45-yard touchdown pass from Johnson to Tony Hill, which gave the Tigers a 59-12 lead.

Vincent responded with a 11-play, 73-yard scoring drive, which was capped with a 26-yard touchdown run by Johnson. Lilly successfully ran it in for the 2-point conversion, which cut the deficit to 59-20 with 6:55 remaining. Neither team scored the rest of the way.

Lilly led the Yellow Jackets with 123 rushing yards and a touchdown on 27 carries.

Johnson added 76 yards and a touchdown on 20 attempts. Groce finished with 67 yards on six carries.