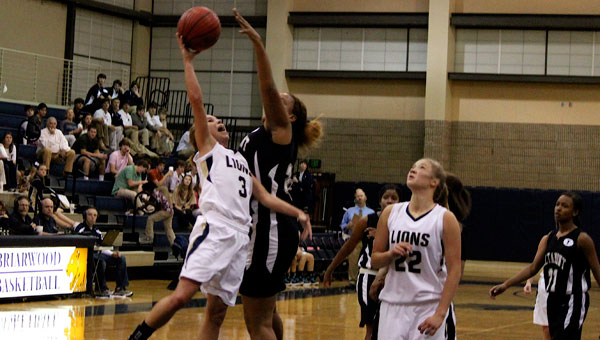 NORTH SHELBY — The Briarwood Christian School girls’ basketball team had one major obstacle to overcome to take a 47-32 victory in its season opener Nov. 15 against the visiting Altamont Knights.

“We had to figure out a way to guard her, and we did a great job on her second half,” Briarwood head coach Jim Brown said of Bryant, who scored 25 points for the Knights. “They’ve got a terrific player. She’s definitely a Division 1 type player, so for them to wind up with 32 points, I’ll take that every night.”

Altamont (1-1) snagged the lead following a quick start, but senior guard Cara Medders sunk three free throws to give Briarwood (1-0) its first lead at 8-7 late in the first quarter, and a layup from senior center Sarah Ann Johnston extended that lead to 10-7 to close out first-quarter scoring for the Lions.

Junior guard Abbie Cutcliffe sunk a 3-pointer to start the second quarter as Briarwood began finding its rhythm. A 3-pointer from sophomore forward Hannah Wainwright paired with two field goals from Cutcliffe closed out the half , giving the Lions their largest lead of the game at 27-20.

Wainwright came out of the locker room on fire, scoring 8 unanswered points to start the second half, hitting two more shortly thereafter to extend the Lions’ lead to 41-26  going into the fourth quarter.

“I think in the end we played really well as a team,” Medders said. “There’s definitely stuff we need to work on, but I feel like we came together and started working well as a team.”

Briarwood began displaying its dominance during the fourth quarter, and late buckets from Wainwright, Johnston and junior forward Samantha Swords sealed the 47-32 win for the Lions.

“I thought it was a good start,” Brown said. “We shot the ball well tonight, which was good, and I thought our defense overall was pretty good. I was hoping to see a little bit better rebounding. That’s an area that we kind of hammered in tonight, but I think we’ll get better at that.”

Wainwright led the team with 21 points on the nights. Cutcliffe totaled 10 points while Johnston added 6 and Medders had 5.

“I was really excited, but I was also really nervous with this being my first game as a senior and having to step up and get in that leadership position,” Medders said. “I’m so excited to have our first win at home. It’s a great start to the season.”