Lions down Trojans to earn rematch 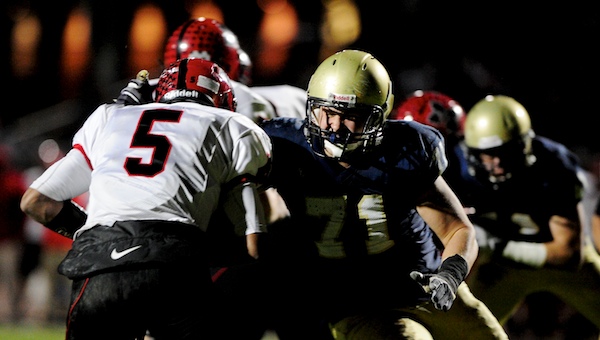 NORTH SHELBY — It wasn’t a flawless performance by Briarwood Christian School in a 19-0 dominant shutout against Muscle Shoals in the Alabama High School Athletic Association Class 5A quarterfinals Nov. 18, but it was close.

According to senior defensive back Will Byers, it was the culmination of the best five days the Lions have put together the week of a game.

“This was definitely the best week of practice we’ve had all year,” Byers said.

Briarwood Christian finished with 262 yards of total offense and limited the Trojans to only 149 total yards, while also capitalizing on a couple of Muscle Shoals turnovers and untimely mistakes on special teams.

The Lions turned a pair of short Muscle Shoals punts into 10 points and iced the game on an interception by Byers and a fumble recovery by Wesley Jones in the fourth quarter.

Senior running back Matthew Furuto led the Lions with 98 rushing yards and a touchdown on 26 carries, which caught the attention of Briarwood Christian coach Fred Yancey.

“Muscle Shoals played great,” Yancey said. “Matthew just had to grind it out. He’s got a lot of guts.”

Muscle Shoals completed a 37-yard pass play on its opening drive before the drive stalled near midfield.

Following a six-play drive by the Lions that resulted in a punt, an ensuing 8-yard punt by the Trojans set up Briarwood Christian’s first scoring play in the game.

Robert reeled in a 16-yard pass from Craft on a fourth-down play, which kept the Lions’ drive alive and allowed senior kicker Benson Mulvaney to give Briarwood Christian a 3-0 lead on a 27-yard field goal with 37.1 seconds remaining in the opening quarter.

The Lions put together a 11-play drive deep into Muscle Shoals territory in the second quarter before coming up empty following a fumble by Craft inside the red zone. Muscle Shoals had with a 32-yard rushing play and a 35-yard passing play to move the ball near midfield on two separate occasions, but the Lions’ defense stepped up and kept Muscle Shoals from driving deep into Briarwood Christian territory late in the first half.

The Lions opened the second half with a nine-play, 68-yard scoring drive, which was capped with a 15-yard touchdown pass from Craft to Robert with 9:14 remaining in the third quarter. Mulvaney’s extra point attempt was blocked, which left Briarwood Christian with a 9-0 lead.

Craft scrambled for 29 yards on a first down play and Furuto rushed for 20 yards on another play to keep the touchdown drive alive.

Following a short punt by Muscle Shoals from its own end zone, the Lions capped a two-play, 7-yard scoring drive with a 1-yard dive for a touchdown by Furuto with 6:39 left in the third quarter. The scoring play pushed Briarwood Christian’s lead to 16-0.

Briarwood Christian senior defensive back Devin Bowman intercepted pass to end the Trojans’ ensuing drive. The Lions’ defense kept up the pressure in the second half with another interception by Byers and Jones’ fumble recovery.

Meanwhile, the Lions iced the victory with a nine-play, 45-yard scoring drive late in the fourth quarter. The drive, which included a 14-yard pass from Craft to Robert and a 14-yard run by Craft, was capped by Mulvaney’s 24-yard field goal with three minutes remaining in the game.

The Lions (12-1) will travel to Hartselle, which defeated Center Point 17-7 in the quarterfinals, in the Class 5A semifinals Nov. 25 in a rematch from a year ago. Briarwood Christian earned a berth in the Class 5A championship game last season following Wilson Whorton’s 43-yard field goal as time expired against the Tigers, which lifted the Lions to a 24-21 win over Hartselle.

Yancey said he expects the Lions will face a motivated Hartselle team with another  trip to the Class 5A championship game on the line.

“It will be another tough one,” Yancey said.

Furuto agreed with his coach.

“It’s going to be an exciting game,” Furuto said.