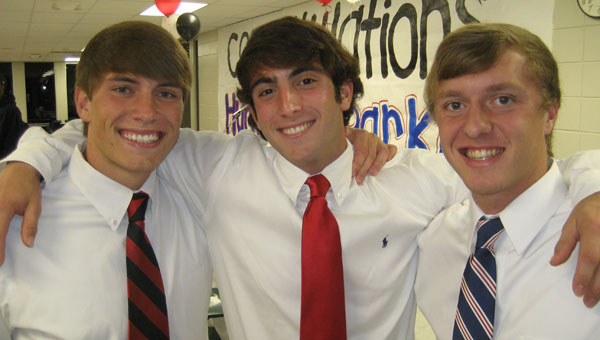 Last Thursday night, three boys accustomed to casual clothes and baseball uniforms spent some time in shirts and ties. Each boy had chosen his tie with care to match the baseball cap he would acquire before the end of the evening.

Hunter Soleymani, Parker Curry and Ty Pierce were treated to a party celebrating the signing of their college scholarships.

The three boys delighted their guests with remarks about their school, community and families.

Each young man had an opportunity to speak, a call from his soon-to-be college coach and a letter to sign.

The boys were surrounded by supporters, including family members, teammates, friends, parents of teammates and friends, little league coaches, teachers, administrators and Pelham’s Mayor Don Murphy, who all came to wish these young men well and to share in the joy that bubbles to the surface when young people realize a dream.

Head PHS Baseball Coach Jeff Mauldin said that these three boys “love what they do and love Pelham.”

Mauldin also recognized the boys as academic stars on the baseball team ranking as first, third and fourth academically among their baseball teammates.

Curry, who will be attending college and playing baseball at Samford University next year, spoke first.

Soleymani, who will be a student-athlete playing baseball at the University of South Alabama next fall, spoke next. Soleymani thanked his parents for their great example and words of wisdom through the years. Soleymani credited his dad for instilling a strong work ethic in him and his mom for encouraging excellence.

Knowing these three boys and their families is a blessing.

A commitment to God, family and hard work has empowered these three young men. With one more season yet to play as Panthers, Curry, Soleymani and Pierce look forward to their senior baseball season and college careers that will continue to make Pelham proud.

By CONNIE NOLEN / Community Columnist Jo Flo’s Jungle is coming to Pelham. The citizens of Pelham may wonder where... read more