When my students and I saw that this year’s National Scholastic Press Association’s Convention was in Minneapolis, we never dreamed we could attend. An email stating that some of my committee work made me eligible for a travel stipend took me by surprise. A first-year officer on a state committee, I didn’t know that a travel stipend was available. I did know that I had returning Literary Magazine students who desperately wanted to attend the national convention.

Most of these students helped produce last year’s “Exposure” edition of our Pelham High School Literary Magazine, “More than Words.” Their hard work created an amazing magazine, but they were nervous about producing a 2012 magazine without their InDesign-savvy friends who graduated last spring.

The confidence this group needed, the training we were lacking and student ownership of the magazine could all begin in Minneapolis. The National Scholastic Press Association hosts an annual convention for high school students. Classes on design, writing and photography are taught by the most talented professionals in the industry. The country’s brightest students attend — and leave brimming with even more potential. 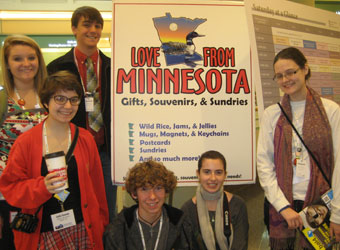 Several of my students wanted to go, but I only received committee money for my travel, and a last minute trip in November to Minneapolis was not in anyone’s budget. Having traveled to national conferences in the past, I knew that the classes would provide incredible training. Pelham City Coucil Member Bill Meadows took our request for funding before the mayor and council. We were approved and soon were on our way.

Four of the six students on the trip had never flown on an airplane before. Most had never ridden a subway or bus, and my students were surprisingly excited about the airport’s moving walkway.

Amazingly, these brave students kept rushing ahead of me. Ready for the next adventure, they hardly noticed that I was hanging back — sometimes resting, and sometimes admiring their bravery. My students have brought back to their classmates new fundraising plans, improved design and photography expertise, plans for more online presence and motivational games to keep everyone inspired.

My last photo of the trip was of these six students trudging ahead of me in the snow, leading the way as they finished the last leg of our journey and what PHS senior Emily Sansom called, “The best field trip ever.”