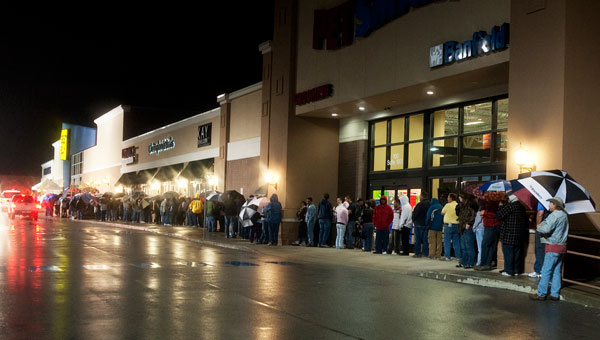 In 2010, the annual Auburn-Alabama football matchup fell on the Friday after Thanksgiving Day, and dampened sales at some of the city’s stores. But the 2011 Iron Bowl didn’t kick off until Saturday, spelling huge crowds and booming sales for Promenade retailers.

“It was great. We didn’t open early or anything, but we did have some special sales,” said Diane George, manager of Alabaster’s Campus Spirit store, which specializes in Auburn and Alabama gear of all kinds.

“Last (Black Friday) was slow, because the ball game was that day,” George said. “But we did really well this year.”

A few doors down from the Campus Spirit store, early bird deal seekers began camping out at Best Buy the day before Thanksgiving, and began lining up in front of the Target store Thanksgiving Day afternoon, said a Target manager.

“We did great. We saw a shift in sales between Saturday and Friday because of the football game,” Koch said. “We opened at 3 (a.m.) this year, which was an hour earlier than we opened last year.

“We were busy from the time we opened the doors, and traffic was good throughout the whole weekend,” Koch said. “Overall, our sales numbers were very good. We were very pleased.”

“It went really well for us. We had a lot of good deals and a lot of deep discounts,” Armstrong said.

At the southern end of the Promenade, a 4 a.m. opening time helped the JC Penny department store get a jumpstart on its holiday sales, said store manager Linda Sanders.

“It went pretty well,” she said. “It was very busy early on for us.”

But the Iron Bowl date change opposed this year’s “small-business Saturday,” which was a nationwide day intended to boost sales for locally owned businesses.

“It kills us on Saturdays with the football games, even when they play on TV, which is pretty much every weekend,” said Roy Mitchell, owner of the Bed and Futon Gallery in old downtown Alabaster. “But business always picks up on our smaller items this time of year.”

Businesses in the county’s smaller communities enjoyed extra business on Black Friday. Linda Cook, owner of Busy Hands Framing in Columbiana, offered a 25-percent discount on everything except custom framing.

“We don’t have what they do in the big stores, but I participated in the small business Saturday,” Cook said. “We had more traffic this year on Friday than last year. I Facebooked it a lot this year, and that may have been the difference.”

Charles Rich, co-owner of Toluca Pottery and Things in Chelsea, offered 25-percent off the store’s chimineas, but said customers tend to travel to the Galleria and larger shopping areas on Black Friday. He is offering a sale depending on the weather.

“I do it every year,” Rich said. “It’s a snow sale. If it snows tonight, then our chimineas will be half off. I did it the first time, and people seem to like it.”

At another locally owned business, Monograms n More on Fulton Springs Road, owner Janice Young said she both participated in and benefited from the Black Friday weekend.

“I actually closed the store on Friday so I could go Black Friday shopping at the other stores,” Young said with a laugh. “But we had a good day on Saturday. It was probably busier than a normal Saturday.”