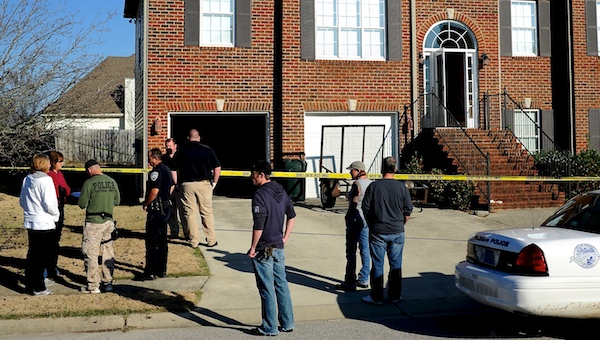 Officers with the Helena PD work the scene of a shooting on the 400-block of Old Cahaba Way in Helena on Nov. 30. (Reporter Photo/Jon Goering)

Emergency crews airlifted a burglary suspect from a Helena house after police said the man shot himself once in the head when he was confronted during a burglary attempt.

According to reports, police responded to 430 Old Cahaba Way shortly after noon after a neighbor called 911 to report a burglary at the residence.

When police arrived on the scene, they found the door to the house open, and discovered the suspect inside, police said. When confronted by officers, the suspect fled to the second floor of the house before officers heard a single gunshot, officers said.

Police officials said officers then exited the house and called for reinforcements.

Officers then re-entered the house and discovered the man suffering from what police said was a self-inflicted gunshot wound to the head.

Emergency responders then airlifted the man from the scene to a local hospital.

Shortly before 3 p.m. Nov. 30, Helena police officers were still on the scene and had taped off the yard to the residence.

At about 2:30 p.m., crews towed a green, late-model Toyota Corolla bearing a Talladega County license plate from in front of the house.