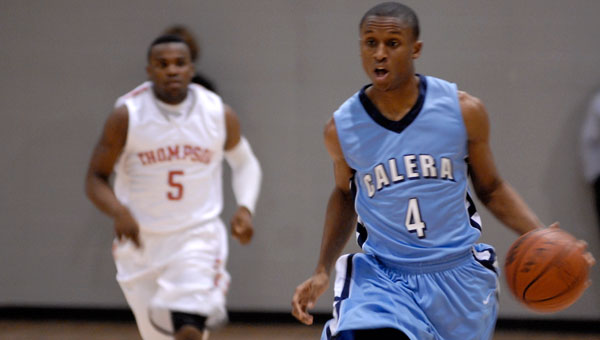 ALABASTER — Fans of both the Calera High School boys’ basketball team and host Thompson had been pumped up for three quarters waiting for a moment to explode in the first meeting between the two teams this season Dec. 2.

It came courtesy of Calera senior guard Deondre Haynes in the first minute of the fourth quarter, when everyone inside the packed gymnasium erupted.

One side rose to their feet in ecstasy, Calera, while the other rose in anger. Haynes’ thunderous slam marked the beginning of a 12-1 run by the Eagles in a 47-44 win over the Warriors.

“It was amazing,” Haynes said. “I’ve never been a part of anything like this.”

Calera held off a late run by Thompson in a game that went back-and-forth for the first 24 minutes. The largest lead through the first three quarters was six points, by Calera, late in the first half.

After the Warriors took their final lead on a 3-pointer by Caleb Johnson just seconds into the fourth quarter, the Eagles sped up the pace and took control of the game to hand Thompson its first loss of the season.

“We talked about executing on offense, defending harder and rebounding better,” said Calera coach Robert Burdette. “Down the stretch in the fourth quarter, we did those three things.”

Haynes, who had only two points and made just one field goal in the opening half, led the Eagles (5-1) with 14 points in the victory.

Threatt scored the Warriors’ first five points in the game to give Thompson an early 5-2 lead. Clark drained back-to-back 3-pointers midway through the first quarter to give Calera its first lead, 8-6, with 3:59 remaining in the period.

Threatt’s 3-pointer with 1:50 left in the quarter gave Thompson a 9-8 lead heading into the second period.

Haynes scored his lone points in the half on a jumper with 5:04 remaining in the second quarter, which cut the Eagles’ deficit to 13-12. Haynes’ basket sparked a 9-0 run by Calera, which held a 19-13 lead following a layup by Adams with 1:39 left in the first half.

Thompson closed the second quarter with a 6-0 run and tied the game at 19-19 following a 3-pointer by Lewis at the buzzer, which sent the home crowd into a frenzy.

Clark led Calera with nine points in the first half. Threatt led the Warriors with eight points at the break.

A breakaway dunk by Haynes gave Calera its largest lead in the third quarter, 27-23, with 2:58 remaining in the period. Threatt drained a 3-pointer with 2:43 left in the quarter to tie the game at 27-27.

Johnson’s 3-pointer gave Thompson momentum and a 35-33 lead to open the fourth quarter before the Eagles took over.

Thompson closed the game with an 8-2 run to cut the deficit to three points, but Thomas’ 3-pointer from the corner with two seconds remaining bounced off the rim to seal the Eagles’ 47-44 victory.

Thompson coach Patrick Davis said the Warriors had trouble playing from behind in the fourth quarter.

“It’s the first time we’ve trailed all year, really,” Davis said. “Our offensive execution was not good at all. We know what we’ve got to do to get better.”

Burdette said the game will help both teams in area play later in the season.

“What an atmosphere this was,” Burdette said. “This is the way basketball is supposed to be played.”

Oak Mountain wins matches in Over the Mountain Duals

FROM STAFF REPORTS The Oak Mountain High School wrestling team won a pair of matches Nov. 30 in the Over... read more